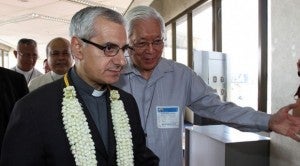 This was the message conveyed by Papal Nuncio to the Philippines Guiseppe Pinto during his homily in a Christmas Mass he celebrated at the Sto. Niño church, this city. The church was one of the city structures badly damaged by supertyphoon “Yolanda” (Haiyan).

The Papal Nuncio said that Pope Francis has always included all the victims of the world’s strongest typhoon this year in his prayers.

“The Holy Father has already shown his closeness to the victims of supertyphoon Yolanda, especially you who have witnessed a catastrophe beyond all telling. It is my privilege to bring to you the solidarity of his Holiness Pope Francis. You know how much he cares for you,” said Pinto, the Holy See’s representative to the country, in his less than 10 minutes homily inside the rain-soaked main church of Tacloban, considered to be the ground zero of Yolanda, which resulted in deaths of more than 6,000 people. Close to 2,000 people are still missing.

He disclosed that Pope Francis, speaking before a group of faithful that included several Filipinos in a Papal audience at the Vatican on Nov. 21, said that he “felt that the trials were too tough but I also felt that the (Filipino) people were strong.”

“Christmas is an assurance that despite the tragedy you have faced, you are not alone. God is with you, God is with us! Our faith sustains us to look ahead jointly and to move forward,” he said before a thousand people attending the Mass.

Prior to saying the Christmas Mass at the Sto. Niño Church, Pinto led the Mass at the Palo Cathdral in Palo town, where he was joined by Leyte Archbishop John Du and several priests of the Our Lady of Transfiguration, the official name of the cathedral, on the eve of Christmas.

Pinto arrived here on Dec. 24. He returned to Manila on Dec. 25. During his visot to Tacloban, he also made short visits to the Redemptorist Church and the San Jose Church, both in Tacloban.

The two churches were among the 15 churches within the vacariate of Tacloban that sustained damage due to Yolanda.

Elsewhere in the city, Christmas eve celebration among Taclobanons was literally dinner by candlelight.

With electricity still not available to households here, city folk both at home and at the evacuation centers used candles to light their dining tables as they partook of simple noche buena fares.

Lorna Aranis, 41, still observed the Christmas noche buena with her husband and their remaining five children, dining on canned foods that came from donors.

The Aranis couple lost two of their children, Laurence Joy, 8 and Rafael, 4, to the typhoon.

The family lived in Barangay 94 of this city where almost all of the houses were swept away to the nearby Lirong River, she said.

There was no pancit (rice noodles), their usual fare in past noche buenas, but she said they were just glad they had a meal to share this Christmas.

“Grateful to be alive” was also the common sentiment among those who attended the midnight Mass at the Sto. Niño Church.

Lucia Sabungan, 37 of Barangay (village) 36, said she attended the Mass to say her “thank you” to the lord for saving her family.

“We have so much to be grateful for and be thankful for. God helped us survive the fury of Yolanda,” she said.

It rained here on Christmas eve and the church, with its main ceiling blown off, was just covered by tarpaulin but rain water still flooded its marble floor.

Msgr. Alex Opinino, Sto. Niño parish priest, said the Nov. 8 typhoon should be a reminder to all faithful, specially those who survived, that “Jesus Christ is our saviour.”

“Today we celebrate the birth of our lord savior … we have to embrace Jesus as our personal  saviour. Jesus saved us because he loves us,” Opiniano said in a homily before some 500 churchgoers that included Tacloban City Mayor Alfred Romualdez and wife Councilor Cristina Gonzales Romualdez and members of various international humanitarian groups who have stayed on in Tacloban, celebrating their Christmas for the first time among typhoon survivors.

Kenyan Michael Arunga, information management officer of the United Nations Office for the Coordination of Humanitarian Affair(UN-OCHA), said he saw as “a very humbling experience” the fact that the city still managed to observe Christmas despite what it went through.

“Despite what had happened, despite the typhoon, people still celebrate Christmas. It’s very moving, especially for an African like me,” said Arunga.

Frances Fierst of the International Labor Organization said that being in Tacloban during this time of the year has been an unforgettable experience.

“It’s really heart-breaking because it’s not just here in Tacloban. I have driven to Guiuan in Eastern Samar, to Ormoc in Leyte. I have seen natural disasters before but never such a wider area so it’s hard to imagine getting things to normal here. Still, people still manage to observe Christmas, she said.

There are more than 500 volunteers representing 21 various international humanitarian groups still in Tacloban who were treated to simple “thank you” Christmas party by the city government held at the grounds of the city hall on the night of Dec. 24.

City administrator Tecson John Lim said the dinner was the only way for them to express their gratitude to the international groups, which extended help to the devastated city.