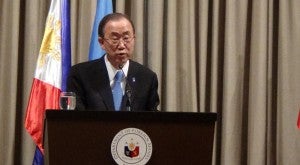 “I hope a final agreement will be reached soon,” he also said.

Ban was referring to the signing early this month by negotiators of both camps regarding the sharing of power between the national government and local authorities under a proposed new Bangsamoro autonomous set-up in Muslim Mindanao.

Del Rosario said that Ban “praised” President Aquino for the success of the Mindanao peace process in their meeting last Saturday.

The foreign secretary also took time to laud Ban for the “UN’s contribution to find durable solutions to peace and security problems around the world.”

“Let me pay tribute to the Sec Gen for his leadership and untiring efforts to promote international peace, development and democracy and the upholding of the dignity of all human beings,” Del Rosario said.