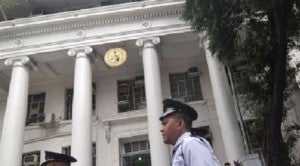 MANILA, Philippines – The Department of Justice filed before the Pasay City Regional Trial Court criminal charges against Immigration officials implicated in the escape of a wanted Korean.

Ordered charged for bribery, violation of the Anti-Graft Law, Code of Conduct and Ethical Standards for Public Officials and Employees and Grave Misconduct include Immigration Officer Augustus M. Caesar Morales, Ma. Roselle Sacendoncillo and Fernando Pedrajas from the Department of Transportation and Communications (DOTC).

Meanwhile, lawyer Arvin Cesar Santos of the Law and Investigating Division of the Bureau of Immigration and lawyer Jing Oliver Balina were charged with a separate case for violation of the Anti-Graft Law. Santos will also be administratively charged for gross neglect of duty.

The case stemmed from the escape of Park SungJun who is wanted for an investment scam in South Korea.  He sneaked out of the country last March 18.

Sung Jun has been included in the Immigration blacklist in 2012 for being undocumented and undesirable alien. The order was issued upon the request of the Korean Embassy from the Immigration’s Fugitive Search Unit (FSU).

Park SungJun’s passport has been cancelled by the Korean Ministry of Foreign Affairs and Trade on March 13, 2012 and is subject of the Interpol Red Notice.

The DOJ said the Immigration officers knew well that Park SungJun is in the blacklist yet Sacendoncillo processed his passport and stamped his boarding pass while Pedrajas not only extended his stay at the airport but also escorted him from the departure hall all the way to the final x-ray examination area without securing a pass three days prior to actual departure.

The DOJ said Balina approved the pre-arranged employee visa application of Park SungJun and forwarded it to Santos’ office instead of alerting the bureau. Santos, on the other hand, should have been more prudent in evaluating the records forwarded to his office.