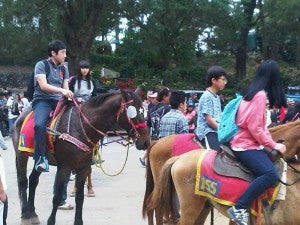 MANILA, Philippines—South Korea remained the Philippines’ largest source of tourists this year while the number of tourists coming from China went down by 70 percent, immigration authorities said.

In a press briefing on Tuesday, the Bureau of Immigration said South Koreans topped the chart of top ten tourists in the Philippines in 2013 with 1,010,056 arrivals from Jan. 1 to Dec. 5 this year.

It was followed by the United States with 649,664 tourist arrivals to the Philippines and Japan with 371,122.

China remained at the fourth spot with 312,395 tourist arrivals during the same period.

Siegfred Mison, Bureau of Immigration officer in charge, noted the decline of tourists coming from China in the last three years.

“There was a big decline. Remember that two to three years ago, most of our tourists were coming from China. From last year up to this year, it’s now South Korea,” said Mison, noting a 70 percent decline of Chinese arrivals following the 2010 Manila bus hostage crisis.—Nina P. Calleja

Read Next
Kerry warns China: No more air defense zones
EDITORS' PICK
‘Not yet the end’: Lawyer says Marcos Jr’s DQ cases to take lengthy process
Omicron now shows up in 90% of samples sequenced – Duque
Acer starts the year off strong with the Aspire Vero National Geographic Edition
4.7 million Filipinos have received booster shots, but that’s still a ‘low’ number – Galvez
Over 3 Million worth of prizes to be won at Smart Padala’s SENDali Manalo Promo!
The best of bayside and city living at SMDC’s Sail Residences
MOST READ
When to get boosters after positive COVID test
In Batanes, octogenarian dies of COVID-19
Duterte asks: ‘Is COVID-19 airborne?’ Duque blames spread on ‘token compliance’ with rules
NBI foils escape attempt of Kerwin Espinosa, two others
Don't miss out on the latest news and information.