US vows to help PH in tackling security challenges – Kerry 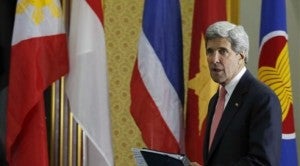 MANILA, Philippines – US Secretary of State John Kerry said Washington is committed to ensuring the security of the Philippines amid tensions in the region caused by China’s assertive territorial and maritime claims.

“The US is committed to working with the Philippines to address its most pressing security challenges, that’s why we are negotiating a strong and enduring framework agreement that would enhance defense cooperation under our alliance including through an increased or rotational presence of US forces in the Philippines,” Kerry said in a joint press conference with Foreign Affairs Secretary Albert del Rosario.

“We have committed $40 million for a new initiative to improve the Philippines maritime security and maritime domain awareness,” he said.

The Philippines and China are involved in a territorial dispute over the West Philippine Sea (South China Sea) where China claims the entire region including portions of the Philippines 200-nautical mile exclusive economic zone.

An arbitration case has been filed earlier by the Philippines before the international Permanent Court of Arbitration in The Hague, Netherlands against China for its claim. China has refused to take part in the proceedings.

China’s recent establishment of an Air Defense Identification Zone (ADIZ) in the East China Sea was seen to have further increased tensions in the region. Kerry said that the US does not recognize it.

Kerry expressed support for the reduction of tensions through the crafting of a code of conduct between the Association of Southeast Asian Nations (ASEAN) and through internationally recognized dispute resolution mechanisms.

“We strongly support ASEAN’s efforts with China to move quickly to conclude a code of conduct as a key to reducing the risk of accidents or miscalculation” Kerry said.

“We support internationally recognized dispute resolution mechanisms, such as those that are provided in the law of the sea convention. The US strongly opposes the use of intimidation, coercion or aggression to advance territorial claims,” he said.

The US will stand with the Philippines and its allies in Asia in the peaceful resolution of disputes. Kerry called for all parties to come together in resolving all disputes through international law.

“What’s important is to lower the intensity, avoid the provocations, work through international law, and for the claimants to stay united and to press international law as the means of resolving this,” Kerry said.

“In this day and age we should be long past the time of unilateral assertion and of coercion as a means of trying to back up that assertion. The US will stand with our friends in this region who are asserting their efforts to try to resolve this through that kind of legal peaceful process,” he said.