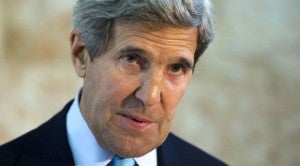 MANILA, Philippines – United States (US) Secretary of State John Kerry announced Tuesday that it has committed $40 million in improving the Philippines maritime awareness and security capabilities.

“We have committed $40 million for a new initiative to improve the Philippines maritime security and maritime domain awareness,” Kerry said in a joint press conference with Foreign Affairs Secretary Albert del Rosario Tuesday.

The $40 million grant will be over the course of three years under the US Global Security Contingency Fund which will enhance the country’s law enforcement capabilities to secure its maritime borders and to combat terrorism.

“The US is committed to working with the Philippines to address its most pressing security challenges, that’s why we are negotiating a strong and enduring framework agreement that would enhance defense cooperation under our alliance,”

He reiterated its commitment to the security of the Philippines amid escalating regional tensions caused by China’s territorial claims and its establishment of an Air Defense Identification Zone (ADIZ) in the East China Sea.

Kerry is in the Philippines for the first time as Secretary of State for the final part of his tour across Asia. He previously visited Vietnam and the city of Ramallah in the Middle East.

He will also travel to areas devastated by super typhoon Yolanda (international name Haiyan) to see first-hand the relief efforts conducted by the US military and aid agencies.

The Philippines and several of its neighbors are involved in a territorial dispute with China, which has been growing more assertive in its claims.

Early in 2013, the Philippines filed for an arbitration case before the Permanent Court of Arbitration in The Hague, Netherlands over China’s claim in the West Philippine Sea.

China has refused to participate in the proceedings insisting on bilateral talks.