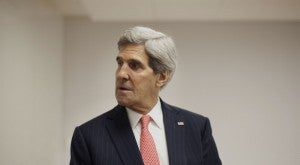 MANILA, Philippines — United States Secretary of State John F. Kerry will arrive in the Philippines on Tuesday to discuss with President Benigno Aquino III the “broadening of economic and security cooperation” between the two countries, the Department of Foreign Affairs (DFA) said Monday.

The US Secretary, in his two-day stay in the country, is also scheduled to meet with Aquino and Foreign Affairs Secretary Albert del Rosario to talk about “cooperation on regional issues.”

“Maritime security is an ongoing issue for the Philippines and the region. And this will be addressed by such bilateral (talks),” Hernandez said during the press conference.

The bilateral meeting is expected to start Tuesday afternoon.

Kerry’s visit coincides with the Philippines government’s standing request for the granting of its Temporary Protection Status (TPS) in light of the devastation wrought by Supertyphoon “Yolanda.”

Kerry was supposed to visit the country back in October. However, the trip was canceled due to typhoon Santi (international name Nari).