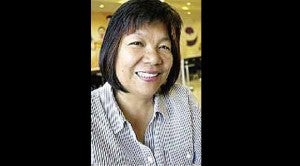 Over two decades ago, Filipinos introduced the first hamburger, the first fast food restaurant, the first bowling center and the café concept to Brunei.

Now, some Bruneian restaurant chains are coming to the Philippines—and they are being accompanied by some of the pioneering Pinoys who honed their skills and built successful working relationships in Brunei.

More than diplomatic maneuvers, overseas Filipinos may yet be the secret to increasing the country’s international trade and investment relations.

Jill-Mari Vargas-Fijo remembered how she, along with four management team members and 10 crew leaders, opened the doors of Jollibee to the people of Brunei in 1987.

“Jollibee was the first fastfood restaurant in Brunei. We were the first to introduce hamburgers here,” she said, adding that the welcome was warm and encouraging.

“It was a very successful opening. Bruneians, Singaporeans, Malaysians and local Chinese patronized the brand. Of course, Filipinos from all over the different districts also visited the outlet. It was the Filipino fastfood giant’s second foreign franchise, after Taiwan. 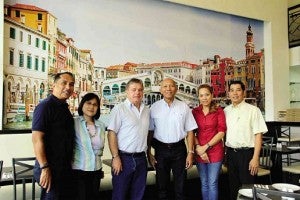 Jill set up the first Jollibee at the Seri Complex at Jalan Tutong, next to the Utama Bowling lane—the country’s first bowling alley set up by Filipino Louie Merino.

The Filipino food chain hired many local Bruneians and sent them to Manila for management training.

Jollibee is now among the big fastfood players in Brunei, with 13 stores in three out of four districts, employing 67 Filipino and 225 Bruneian staff and crew.

When President Benigno Aquino III was in Brunei two years ago, he stopped by the 112-seater Jollibee Serusop branch. “We knew the President was allergic to chicken so we prepared a special Champ for Him. But there were so many people that the President skipped the meal we prepared and spent time posing for photographs with people,” retold Eriel “Joy” Cortez, Jollibee Brunei’s current operations director.

“The President ended up just having a drink. We gave the food we prepared to his party,” he laughed.

“Jollibee is a brand now widely accepted in Brunei. Often times, Bruneians visiting the Philippines, exclaim, ‘Oh, you also have Jollibee in Manila.’ Some people think Jollibee is from Brunei,” said Joy, who took over from Jill in 1997.

Jill left Jollibee in 1997 to open a café in 1997. “Before Ideal Grill and Café, a Bruneian-owned company, there was no café in Brunei. Now, there are a lot of café-cafés. Jill eventually left Brunei to rejoin Jollibee in Hawaii.

Some Filipinos who came in with Jollibee have moved on to work for Bruneian companies. 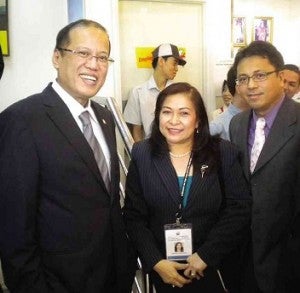 VISITING VIPPresident Aquino inside the Jollibee Serusop branch in Brunei during his June 2011 visit. With him are Arlina Deang Feliciano, Pag-Ibig Representative in Brunei and Eriel “Joy” Cortez, Jollibee Operations Director. Contributed photo by Edgardo Feliciano

There’s Stephanie Alvior, who is now working for a bookstore next to the Utama Jollibee branch.

There are about 21,000 Filipinos working in Brunei—about a 10th are nurses, doctors and engineers; about a fourth are domestic helpers, family drivers and gardeners; and the rest are mostly waiters and waitresses. There are also a growing number of entrepreneurs.

The Bruneians are a kind people, say embassy officials, noting that complaints of physical abuse of domestic employees are rare in the kingdom.

Bruneians also get along with Filipinos. Even Sultan Haji Hassanal Bolkiah employs many Filipinos in his palace.

She has been working there for the last 10 years with another Filipino pioneer, Angelito “Jojo” Hernandez, who came to Brunei in 1989 as a waiter. Jojo, who started out in the food business as a busboy at The Aristocrat in Manila, is now Fratini’s Food and Beverage Manager.

Vangie and Jojo have their own P-noy food story: “During President Aquino’s state visit in June 2011, we catered a very special lunch for the President and his entourage in this restaurant, Vangie remembered.

Then there was another occasion last year, when President Aquino went to Brunei to attend a royal wedding but had to cut short his trip because a typhoon was on its way. He made it to the morning wedding but to avoid getting stranded in Brunei, he skipped the royal banquet scheduled that evening at the Istana Nurul Iman and sped back to the airport around noon. His party stopped to pick up a pizza along the way. That, of course, was Fratini’s famous Pizza Neapolitana, which he reportedly ate on the old and trusted presidential Fokker plane.

Vangie and Jojo were involved in setting up eight Fratini’s branches in Brunei and Malaysia.

Today, after honing their pioneering talents in Brunei, tables are turned.  They are coming home with Bruneian investors to set up their ninth branch in Makati at the SMDC Jazz Residences and Condominium in Bel Air.

International relations indeed begin with friendly and sincere relationships among people on the ground.