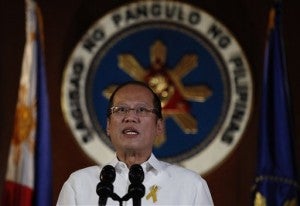 TOKYO — President Benigno Aquino III, along with six Cabinet members, left Manila early on Thursday for a summit meeting with Japan and members of the Association of Southeast Asian Nations (ASEAN).

The President is traveling to Japan for the “40th ASEAN-Japan Commemorative Summit,” an all-important meeting that will allow heads of state and governments in the ASEAN region to discuss with Japan simmering tensions brought about by territorial disputes with China in the West Philippine Sea, East Sea and Yellow Sea.

During the three-day visit of the President, he will have a series of meetings with Japanese political and business leaders to fortify the Philippines’ defense and trade cooperation with Japan.

In his departure statement in Manila, Aquino said it was his “duty” to attend regional summits.

“As always, we will show to the world our ability to unite and rise during trying times. As a responsible member of the community of nations, we’ll continually be part of the pursuit of our collective goal: to bring about a world where every individual and every nation has respect and concern for each other,” said the President.

He said he would have a chance to personally thank Japan for its help in relief and recovery efforts following the onslaught of supertyphoon “Yolanda” (Haiyan) in November and other disasters that struck the Philippines this year.

Shortly after his arrival, the President will meet with the Filipino community at the National Olympics Memorial Youth Center.

He said he would assure the 203,000-strong Filipino community in Japan that the Philippines would push for early recovery for areas hit by disasters.

“One of our special objectives in our trip to Japan is to meet with our countrymen. We all know that they have worries (over their families in the Philippines who have been affected by) past calamities. Thus, we will assure them of government’s resolve to speed up the rehabilitation and rebuilding of communities momentarily brought down by tragedies,” he said.

The President will witness the signing of three exchanges of notes on a post-disaster standby loan worth ¥10billion ($100 million), loan for multi-role response Vessels for the Philippine Coast Guard worth ¥18.732 billion ($187 million), and a revised route schedule for the Philippines-Japan Air Services Agreement to increase air traffic between two nations.

Philippine Ambassador to Japan Manuel Lopez said Aquino’s visit would be an opportunity for him to thank the Japanese people and its government for the help they extended to Filipinos affected by recent calamities.

The President will particularly have the chance to thank Emperor Akihito and Prime Minister Shinzo Abe when he meets with them on Friday.

“This is an opportunity for President Aquino to thank Japan, especially the Emperor and Prime Minister. These are the two highest Japanese officials. And the President will have the chance to thank the Japanese companies and the Japanese public who had given so generously,” Lopez said.

Japan was among the most generous members of the international community that have extended aid to survivors of Yolanda, which flattened central Visayas on November 8, leaving 5,924 people dead and 1,779 missing.

During the three-day visit, the President will also engage in political, defense and business talks with Japanese leaders led by Prime Minister Shinzo Abe.

Aquino will promote Philippine economic interests in Japan through these scheduled meetings.

While in Tokyo, he would meet with Abe, Emperor Akihito and Empres Michiko, top business leaders and the Filipino community.

The President will have a private dinner on Thursday night with the influential Ishihara family led by ex-Tokyo Governor Shintaro and current Congressman Hirotaka, vice minister for foreign affairs.

Abe will host a “working lunch” with Aquino on Friday.

“The President and Prime Minister Shinzo Abe will meet to discuss among others the recovery and reconstruction program of the government post-Typhoon Yolanda, Maritime Cooperation, the Mindanao peace process and people-to-people exchanges,” said Coloma in an earlier interview.

The President is also slated to meet with officials of Nippon Keidanren, Nidec Sankyo, Sumitomo Metal Mining Company and Sumitomo Mitsui Banking Corp., Bank of Japan and the Japanese Chamber of Commerce.

He will also meet on Friday with the chancellor and president of Sophia University, which will confer on him the honorary doctorate in law, and members of the Japan Philippines Parliamentarians Friendship League.

The sessions of the summit will not begin until Saturday, but the President will join Asean heads of state and governments at a dinner on Friday to be hosted by Abe and his wife Akie at the prime minister’s official residence.

West PH Sea disputes up for discussion in Japan-Asean summit

Read Next
No record Misuari left PH, could have left ‘by other means’—BI exec
EDITORS' PICK
High demand for Illegal drugs seen with relaxed restrictions — DILG exec
House energy committee chair Arroyo bats for cheap electricity
PNP tags 6 still active ‘e-sabong’ sites, request for takedown sent
Honolulu Café is the cure for your Egg Tarts and Roastings cravings
Revilla appeals to critics: Give Bongbong Marcos a chance
Luxe property: A way to build, preserve wealth
MOST READ
Heart Evangelista admits having ‘one-night stand’ in past: ‘Naging kami eventually’
Ramon Tulfo arrested for cyber libel, says MPD
Heart Evangelista gets a ‘no’ from Chiz Escudero after asking, ‘Do I deserve a bag?’
LOOK: Heaven Peralejo shows off beach body in Palawan
Don't miss out on the latest news and information.