10 video games Enrile should play instead of Bejeweled | Global News

10 video games Enrile should play instead of Bejeweled 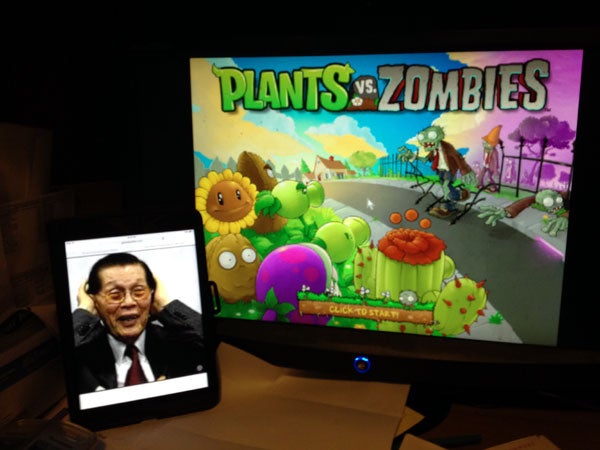 He had to sit there while Senator Miriam Defensor Santiago lambasted him as a crook, denounced him as a fascist, portrayed him as a pervert and accused him of being liar.

And he could only smile, shake his head and play a video game on a tablet.

Now, there’s a hip, tech-savvy old guy for you.

Certainly, a super-rich politician and one-time powerful guardian of dictatorial rule in the country can do better than some dorky tile matching game.

So in case Enrile has to sit through another punishing Senate session, here are 10 more entertaining games that are perhaps even more appropriate for someone with his history and reputation.

The Pigs are all over the place, and it is up to the Angry Birds to bring them down.

Surely, Enrile must have heard of this game. But perhaps he just hasn’t given it a try. Or maybe he’s intimidated by it or just can’t bring himself to bring down those pigs.

Well, if the senator feels more for the pigs, there’s also a game for that.

Pigs are the stars in Bad Piggies. The goal: help them find and collect eggs by creating an effective flying machine.

“Those tricky pigs have a few objects they can use, but they need your help turn those into the perfect transportation,” the game site says. In a way, it’s kind of like dealing with the maze of pork-barrel schemes we’ve been hearing much about.

You have to defend the state by checking papers, interrogating suspected enemies, even taking extreme measures.

Greedy Bankers vs. the World

This is kind of like Bejeweled but with a greedy twist. Your goal is, as the game says, “to be ruthless” in acquiring as much wealth as you can.

Here’s the deal. All the clocks in the world have been stolen, and Beat Sneak Bandit has to steal them back.

Again, all about stealing.

This should be another 70s throwback for the senator.

This is parody of North Korea, which should bring back memories of Marcos-era Philippines. It’s all about surviving in and running a totalitarian state, and even find ‘joy’ in getting rid of all its enemies.

You have an alligator, named Swampy. He lives in a city’s sewer system. Now Swampy hates being dirty, but there’s a problem: Whenever he tries to take a bath, a rival alligator. Cranky, blocks the flow of water. So you have find ways to let the water flow to make Swampy happy.

This is my personal favorite and I’m sure Enrile will enjoy this too. It’s a classic tower defense game:

The goal: help the plants defend their home from the marauding zombies. If you fail, the zombies eat your brain.

But the senator must remember this: Unlike in some paramilitary settings he may have been familiar with, the zombies are the bad guys.

The goal is to stop them, kill them — not coddle them!