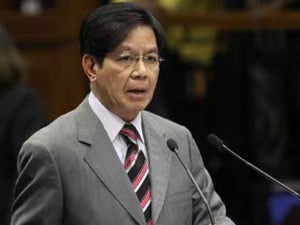 MANILA, Philippines—Greenpeace on Friday proposed that the government take the rehabilitation and reconstruction of areas devastated by Supertyphoon “Yolanda” as an opportunity to build climate-resilient communities powered by renewable energy (RE).

The environment group cautioned the government from repeating the mistakes of the past, as it advised newly appointed rehabilitation head Panfilo “Ping” Lacson to consider the work ahead as a chance to establish sustainable communities using RE systems.

“Aside from the human tragedy, we also have to deal with the socioeconomic impacts. Because the work ahead is massive, critical decisions will be made for the reconstruction and repair of energy systems in the devastated provinces. And this is where RE can make a difference,” she said in a statement.

Yolanda cost the country an estimated P35 billion worth of damage to infrastructure and agriculture. Power systems are mostly down with 1,959 transmission facilities partially or fully destroyed, according to Greenpeace.

Greenpeace said solar panels can make a huge difference to disaster-hit areas, when power lines are down for many days, if not months.

“There would be cost savings for the entire archipelago, and the size of the savings would be commensurate to the number of households and businesses whose partial or total energy re silience would make them suffer less in the aftermath of storm-induced blackouts,” it said.

Obusan said a decentralized energy system, through RE was needed to power communities, especially those living off the main grid.

She cited as an example small-scale solar energy systems that could “foster a small-town energy revolution by and for people, families, communities, farms, and small and medium-sized businesses.”

With RE-powered multimedia technology, teachers and students will have the opportunity for better teaching and learning conditions.

“The ongoing reconstruction will give the government an opportunity to rethink energy systems in these devastated areas,” Obusan said.

Read Next
Some Filipinos could stay in the US indefinitely due to ‘Yolanda’
EDITORS' PICK
CNN crew arrested while reporting on Minneapolis protests
Checkpoints maintained during GCQ to ensure health protocol compliance
Courts fully operational starting June 1
SM prepares for ‘safe malling’
Notice of 2020 regular meeting of stockholders June 18, 2020
Cherry Mobile teams up with Cloud Panda PH, launches online store
MOST READ
LIST: What to expect in areas under GCQ, MGCQ
Two House panels approve anti-terror bill
Restrictions on international travel still in effect under GCQ, says BI
COVID-19 cases rise by 1,046 but only 46 are ‘fresh cases’ – DOH
Don't miss out on the latest news and information.