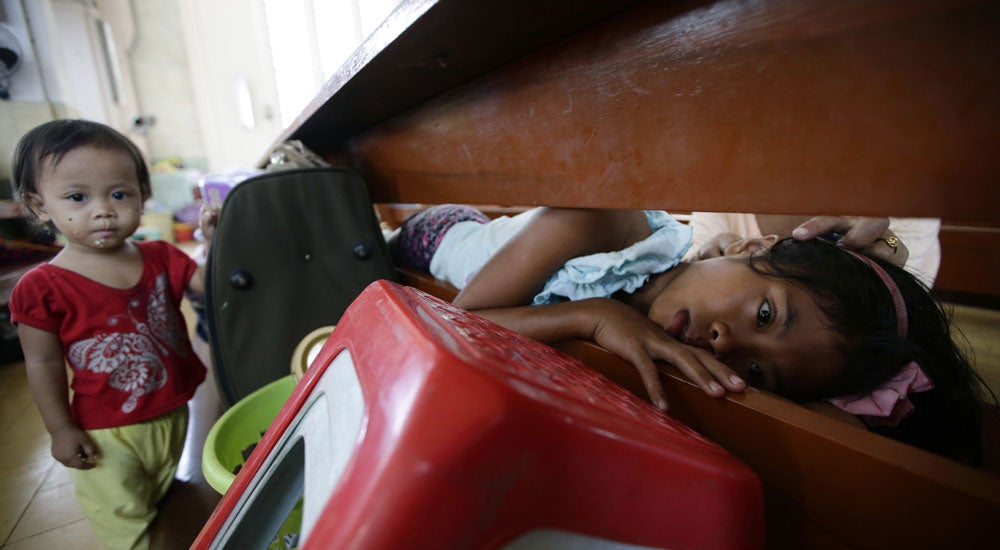 Typhoon survivors Maria Jane Bacsal and her sister Maria Nina Rose, left, rest inside the Redemptorist church, which is serving as an evacuation center, on Nov. 28, 2013, in Tacloban City. Thousands of women and children in the Philippines risk falling prey to human traffickers in the aftermath of last month’s catastrophic typhoon, lawmakers and the chief United States aid agency warned Tuesday, Dec. 4. AP

WASHINGTON, D.C.—Thousands of women and children in the Philippines risk falling prey to human traffickers in the aftermath of last month’s catastrophic typhoon, lawmakers and the chief United States aid agency warned Tuesday.

A US congressman returning from a visit to the storm-ravaged archipelago nation said that while Philippine authorities and US forces were helping vast numbers of storm victims in the Eastern Visayas, more attention was needed to thwart criminal opportunists taking advantage of the chaos after Supertyphoon “Yolanda” (international name “Haiyan”) roared ashore.

“The most vulnerable—women, children, the elderly, and those with special needs—always fare worst during disasters,” Republican Rep. Chris Smith, who led the three-member delegation to the disaster zone last week, told a US House of Representatives foreign affairs subcommittee.

At particular risk of sex trafficking are vulnerable people “who over a longer period of time may have lost some hope,” said Smith.

Such persons in the Philippines, many among the thousands transported out of the disaster zone to cities like Manila, could fall victim to offers of work in Saudi Arabia or Korea, Smith said, only to find themselves with “an engraved invitation to a hell on Earth.”

Washington considers the Philippines as not in full compliance with minimum standards for eliminating trafficking. The US state department’s 2013 trafficking report describes it as a source country for sex-trafficking and forced labor, and that “child sex tourism remained a serious problem” there.

The US Agency for International Development (USAID), which for years has worked with the government of the Philippines to reduce human trafficking, also sounded the alarm at the hearing.

“We are watching this very closely,” Nancy Lindborg, the USAID’s assistant administrator for democracy, conflict and humanitarian assistance, testified.

“To protect the children of the central Philippines during this time of heightened vulnerability, the government of the Philippines and the international community will need to make every effort … to ensure and strengthen local and national protective services,” said Lindborg.—With Cynthia D. Balana