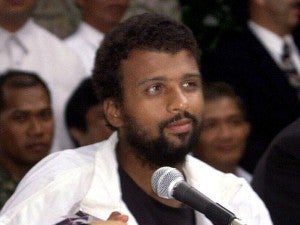 MANILA, Philippines — The National Bureau of Investigation on Wednesday filed criminal complaints before the Department of Justice against a suspected Abu Sayyaf member involved in the abduction of American national Jeffrey Schilling in 2000.

Facing complaints for kidnapping for ransom and serious illegal detention is Nijal Pajiran a.k.a. Abdurahman and Abu Kudama. He was arrested by the NBI’s Counter-Terrorism Division last November 14 at Sitio Sinoropan, Barangay (village) Licomo, Zamboanga City.

A warrant for his arrest was issued by the Pasig City Regional Trial Court.

He is facing a separate kidnapping case for the abduction of members of Jehovas’ Witness on Aug. 20, 2002.

Pajiran is currently detained at the NBI.

He was slapped with the new case after a former Abu Sayyaf member, now under the Witness Protection Program, said he was one of those who guarded Schilling.