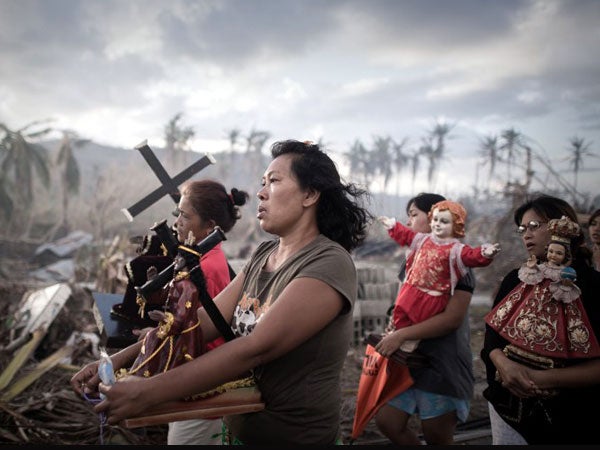 Survivors of Super Typhoon “Yolanda” march during a religious procession in Tolosa in Leyte on November 18, over one week after the supertyphoon devastated the area. AFP/Philippe Lopez

MANILA, Philippines — Amid the devastation and ruins, faith has kept survivors going.

In a state of hell, survivors of Supertyphoon “Yolanda” picked up religious idols and just marched forward, and photographer Philippe Lopez picked up his camera and shot one iconic moment.

Lopez’s photograph during the aftermath of Yolanda was chosen as one of Time Magazine’s top ten photographs of the year.

“The devastated landscape took on a strange beauty,” said Lopez in the caption who took the shot on November 18. “And it was just then that this group of women and children appeared on the road.”

“I think people gravitate towards this picture not only because it is visually strong and emotional, but also because, in a way, it draws on some (of the) viewers’ own faith.”