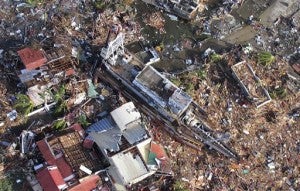 MANILA, Philippines — It may be at odds with the Philippines in the West Philippine Sea, but China is keen to help in another front.

Already supporting relief operations in typhoon-ravaged Eastern Visayas, China is offering further assistance as the Philippines starts reconstruction efforts in the region, citing its experience in giving new life to its own provinces devastated by natural disasters.

“In China, we suffer from natural disasters too. And after the earthquake in Sichuan, we went into rebuilding. We have experience we can show. We’ll be very happy to share this experience,” said Zhang Hua, spokesperson of the Chinese Embassy in Manila.

At least 80,000 perished in the 7.9-magnitude earthquake that struck the western Chinese province of Sichuan in May 2008, triggering landslides across the affected area. In 2011, the Chinese government declared “decisive victory” in rebuilding the province out of the rubble.

“The whole province was demolished. Now, it’s completely rehabilitated after two to three years. Everything is new. People are enjoying their lives,” said Zhang, also deputy chief of the Chinese Embassy’s political section.

He said Chinese Ambassador to Manila Ma Keqing has been working to arrange a meeting with former Senator Panfilo Lacson, the just appointed rehabilitation czar, to discuss possible areas of cooperation.

“They will exchange views,” said Zhang of the planned meeting, details of which would soon be finalized.

“Both of our countries are disaster prone. We are both countries that suffer from disasters. In this area, we can cooperate more closely,” he said when reached by phone on Monday.

Zhang said the assistance could be provided through a bilateral arrangement or through mechanisms within the Association of Southeast Asian Nations, with whom China has been a dialogue partner through the years.

The offer came just as the Philippines condemned China’s latest actions in disputed seas, including the declaration of Chinese domestic airspace over East China Sea islands also being claimed by Japan, and the deployment of an aircraft carrier into the South China Sea.

The Philippines is claiming territories in areas of the sea within its 200-nm exclusive economic zone (EEZ), part of the waters the Aquino administration renamed as the West Philippine Sea in 2012. Manila has a pending arbitration bid before the United Nations seeking to nullify China’s nine-dash line claim covering almost all of the South China Sea and to halt Chinese incursions into the country’s EEZ.

While this issue remains unresolved, both the Philippines and China have vowed to treat the maritime dispute separately from the rest of its overall relations.

“The relations between our governments may not be as good as expected. But people-to-people relations have been very good. We have to build our mutual understanding,” said Zhang.

China has been providing supplies and medical assistance in typhoon-ravaged parts of central Philippines, increasing aid after receiving criticism over its “meager” initial assistance of $100,000 or P4.388 M.

Since then, the Chinese government has sent some P73 million worth of aid, including blankets and tents for temporary shelter facilities for those displaced.

The Embassy earlier expressed its sympathies to the Philippines, saying the Chinese people “are empathetic with the hardships the Philippine people are facing” as Supertyphoon Yolanda (Haiyan) also affected four million people and “caused huge losses and some casualties” in China.

The Association of Chinese Companies in the Philippines have also pitched in. On Monday, the group turned over three payloaders worth P7.5 million to the Philippine Red Cross, equipment “much-needed for clean-up of the disaster areas,” the Embassy said.

The China Red Cross Society’s medical team is meanwhile on the ground in severely-hit Tacloban City and has so far provided treatment to some 1,300 people. A Chinese government medical team has given medical care to some 1,200 people in Abuyog town, Leyte.

China to step up aid to ‘Yolanda’-battered Philippines