US Rep. Honda keeps an eye on his Filipino constituency’s issues 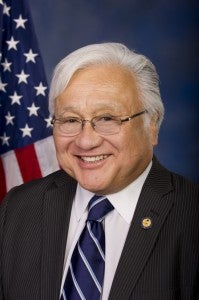 SAN FRANCISCO – Rep. Mike Honda (D — Silicon Valley) reiterated his pledge to help Filipinos recently in the aftermath of Haiyan (Yolanda in the Philippines). His words brought comfort even to Filipinos who were devastated not by the super-typhoon but by the obstacles to immigration reform and the inability of Filipino veterans to get justice.

Honda has been serving Congress since 2001. Currently, he is the US representative for California’s 17th district, including Silicon Valley and western San Jose. Just last month, he received the endorsement of KAYA: Filipino Americans for Progress for his re-election. It is estimated that his Filipino-American constituents number up to 60,000 in the district.

“We’re able to fulfill a promise to Filipino veterans (of World War II). (Mainly for their) surviving spouses and their children (to) be eligible for visas to come to the States. For citizens who are applying for their families to come over, (there’s) very little wait time. Green card holders – there are four different categories. And that’s where the backlog comes up.”

“We’re also working to get rid of the backlog. Because the backlog was created by the definition of family.”

Honda introduced the Reuniting Families Act (HR 2709) in 2009. “There’s 4.7 million visa backlog. So what we did was to take the definition of immediate family for citizens and make it the same definition for green card holders. So there’s no wait. We got it on the Senate side. On the House side, it’s almost the same as at the Senate side right now.”

But it’s still stuck and when does it move on? The Congressman replied, “That’s the big question. I’m committed to it, so are the members of the Democratic Caucus, that HR 2709 will pass with everything in it.”

Honda explained that, “We got everything we wanted (in HR 2709) except to bring in adult siblings.”

Currently, US citizens who want their immediate family members to come over have 18 months to bring them all in, except adult siblings.

Honda said, “We couldn’t get Senate to accept the idea of having the adult siblings because they say that’s chained immigration.”

He also said, “(Some of) the folks who’ve been writing (policy) have families that have deteriorated over generations. Nuclear family is what they identify as family. Some (of those policy-makers) don’t want adult siblings to come in because they become voters too quick.”

“Most people forget that they were also immigrants once. We immigrants define family as mother, father, their children, mother’s parents and father’s parents. It’s the clan.”

Honda said, “We should never forget where we came from. We should always fight for our rights.”

Referring to Filipino World War II veterans, he said, “I think we did a bad job fighting for (them). Senator (Daniel) Akaka (D-Hawaii) had the perfect bill (the Filipino Veterans Family Reunification Act of 2011). President Roosevelt essentially drafted the Filipinos into the US armed forces. (Gen. Douglas) MacArthur told the Philippine Scouts, ‘If you fight with us, we’ll guarantee that you become (US) citizens with veterans’ benefits.’ Come 1945, war was over, six months later, Congress writes two bills to deny them the very thing we promised them.”

“They wrote it in plain English and when you read it, you know it was meant only for Filipino veterans. So I researched this. (President) Truman didn’t want to sign but he needed a budget anyway. He told them, ‘I want you guys to fix this piece.’ But it never got fixed.”

Honda referred to the Recission Act of 1946 which authorized an appropriation of $200 million to the Commonwealth Army of the Philippines on the condition that the Filipino veterans’ service will not be considered as service in the US armed forces. Some Filipino veterans were offered US citizenship in recognition of their service but this did not extend to their children.

Honda also said, “MacArthur said, ‘This is going against our words’ and he was right. But over the decades, the Filipinos never lost hope, never lost their loyalty and I think it’s a shame.”

Even after the American Recovery and Reinvestment Act (ARRA) of 2009 authorized benefits for about 30,000 (about 6,000 of them in the US) surviving Filipino veterans, amounting to $15,000 for US citizens and $9,000 for non-citizens, Honda said, “I wasn’t happy to settle for almost $1,000 a month (for each Filipino veteran). If the vet went back to the Philippines, they took away some amount for Social Security, which was almost $1,000. It was heartless.”

“Sen. Akaka’s bill could have benefited 84,000 more veterans other than Filipinos. It was passed, the money was allocated but the courts said. ‘You can’t do this.’ Some veterans who served in Vietnam and Korea would have qualified because it was based on poverty level. Many veterans are poor. I said that’s the greatest argument to vote for it but nobody got it. Our side chaired the thing. I won’t mention his name but he just didn’t push it. I’m so upset with it.”

Probably not on a national level but second only to the Rape of Nanking during the Sino-Japanese War in 1937, is the issue on World War II’s comfort women. Historians estimate 200,000 Chinese, Korean, Thai, Burmese, Malaysian, Indonesian, Singaporean, Filipino, other Asian countries dominated by Japan in World War II, some Indian and even Dutch women (who were mostly in Indonesia when the war broke out) were pressed into sexual service by Japanese troops. The provision was ostensibly, to quell riots and rapes in the ranks, that’s why the victims were turned in to “comfort stations” for the troops.

Honda’s background and insight put him in a unique opportunity to be the leading US legislator to urge the Japanese government to address the issue.

“We got the resolution passed in 2007. It encourages Japan to accept the historical responsibilities for what their (war time) military had done and also reflect that history into their school textbooks because they took it out of their textbooks.”

It appears that any long-lasting reparation is not expected any time soon. Honda said, “I took out the issue of reparation and said, let’s get the apology first because that seems to be a big barrier. Once you admit it, then the next step is to go for reparations. But even without reparations, the Japanese government is still reluctant.”

Honda said, “I often wonder why even with these things out in the open (referring to different documents and testimonies from survivors and even from Japanese sources), why (the Japanese) can’t move on. I can only think that the prime minister is the grandson of the past prime minister. His grandparent was a pardoned war criminal. So there’s history there. Now, the other prime minister’s family owns a mining company that used to mine metals to make war materiel.”

“I’ve gone to Korea and Japan to talk to their legislators and their press in pursuing this. It was interesting to note that, at first, South Korea did not pass the resolution. Because they said they had a 1965 treaty that they signed with the US and Japan for normalization. And I said, really, asking for apology is part of normalization. So last August 2012, they passed it.”

“The Chinese, Filipinos and Koreans agree with me to take care of this issue. Now, my plan is to go, not to the politicians, but to the centrist media and the public.”

Surprisingly, the issue on comfort women is big in New Jersey and in Glendale, California. In both places, statues commemorating comfort women were erected in 2012 and 2013, respectively. The first statue was erected in South Korea in 2011, when the Japanese government repeatedly requested the South Korean government to bring it down, to no avail. Honda plans to get petitions underway in every state until the issue becomes a national concern.

In other relevant issues, Honda reintroduced the Healthcare Innovation and Marketplace Technologies Act (HIMTA) early this year.  HIMTA proposes a paperless transfer of patient information to facilitate seeing specialists who require MRI, X-ray and other scans for further diagnosis and to cut wait time during appointments. Work is being done on protocol set-up and which agency should administer it.

Honda and Rep. Jackie Speier (D – San Francisco/San Mateo/Redwood City) urged Congress in a resolution to help the victims of Haiyan in the Philippines this month.

In the aftermath of Haiyan, Honda said, “We’re doing research on Aeroscraft. It looks like a blimp (an old time dirigible). They design them so you can put material inside and carry a big load. It will be slow but it will get to the (disaster area) faster than you can get a ship to get there and more supplies than a helicopter can drop off. Aeroscraft can deliver in large bulks so they can take care of a large population at least within the first 36 to 48 hours. Because that’s when people die when you don’t respond appropriately. You can even build inventory on an annual basis.”

According to the aircraft’s manufacturer, Aeroscraft’s range is roughly the distance from New York City to London. Because it is lighter than air, Aeroscraft only uses a third of the fuel that a traditional freighter uses. It can carry multi-modal containers, which means shorter loading and unloading times. Two models can hold 66 or 250 tons. And it needs no airport. The first proto-type has been tested in Los Angeles and plans are afoot that Aeroscraft will be in the market by 2016.