‘Friday Nights at Oakland Museum’ extended to 2014 by popular demand 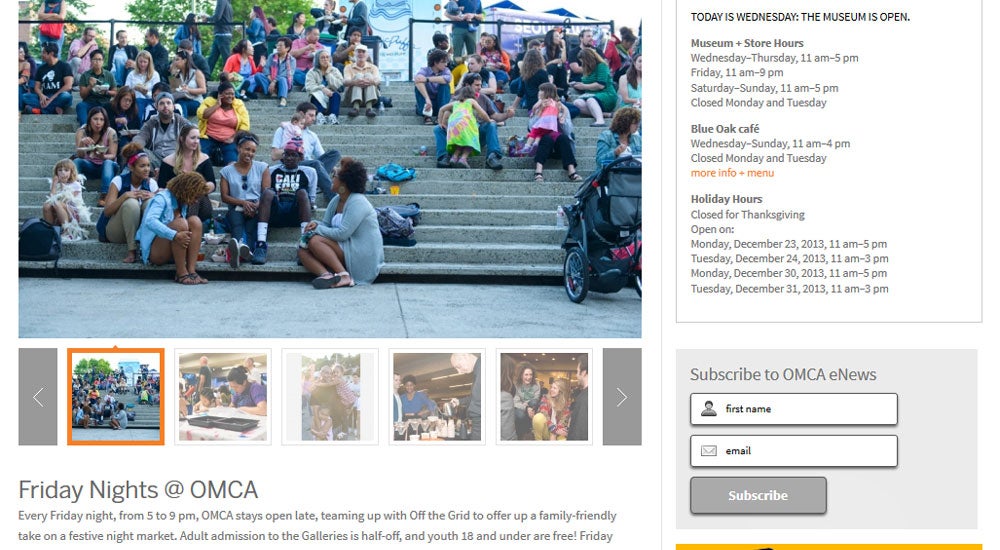 Oakland Museum of California’s (OMCA) “Friday Nights at OMCA” is presented in partnership with Off the Grid: Lake Merritt @ OMCA, featuring extended museum hours and half-price museum admission for adults, free admission for ages 18 and under.

In 2014, OMCA adds to its lineup a new partnership with Whole Foods Market, featuring selected demonstrations from Whole Foods Market’s vast roster of artisan purveyors in the Makers and Tasters Series on the final Friday of January, February and March. Favorite food trucks will return in 2014, along with an influx of new flavors and cuisines from Off the Grid’s vendors.

“By the end of 2013, we will have welcomed nearly 100,000 visitors to Friday Nights @ OMCA in the program’s inaugural year,” said assistant director of public programs Cynthia Taylor. “We’re proud to have been named ‘Most Authentically Oakland Weekly Event’ by East Bay Express, and one of “12 Hot Outdoor Places to Dine and Drink in the East Bay Right Now” by Zagat. With 2013’s success, we’re thrilled to welcome back Off the Grid and other partners to OMCA for another great year of fun, food, and Museum-quality Fridays!”

GET HERE:  OMCA is located one block from the Lake Merritt BART station. Parking is available at the Museum Garage, with a $5 flat fee starting at 5 p.m.

Friday Nights @ OMCA is presented in partnership with Off the Grid, and is made possible in part by generous support from the Walter & Elise Hass Fund.