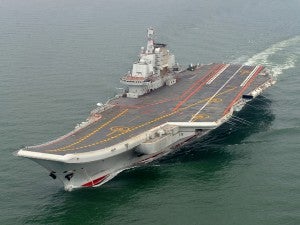 This May 2012 file photo provided by China’s Xinhua News Agency shows the Chinese aircraft carrier Liaoning cruising for a test on the sea. AP FILE PHOTO

MANILA, Philippines – China’s deployment of its aircraft carrier  to the West Philippine Sea (South China Sea) raises tensions and threatens the stability of the region, the Department of Foreign Affairs (DFA) said Wednesday.

“Its deployment raises tensions and violates the declaration on the conduct of parties in the [West Philippine Sea (South China Sea)],” DFA spokesman Raul Hernandez said in a press conference.

China’s first ever aircraft carrier, the Liaoning, was deployed for sea trial to test the ship’s crew and equipment, according to a report from China’s official Xinhua News Agency.

It was accompanied by two destroyers and two missile cruisers, the report said. The ship had previously undergone sea trials in calm waters off China’s northeast coast, it said.

South China Sea is the center of a territorial dispute that involves several countries in Southeast Asia. China claims the entire sea as its territory including parts of the Philippines’ 200-nautical mile exclusive economic zone.

The Philippines has an ongoing arbitration case before the Permanent Court of Arbitration in The Hague, Netherlands against China’s territorial claims.

Philippine authorities were prevented from apprehending the Chinese fishermen by China’s marine surveillance vessels who blocked Philippine ships. China subsequently closed off the entrance to the shoal preventing Filipino fishermen from entering it.

The DFA said that China’s move to deploy an aircraft carrier in the disputed sea does not help efforts to establish regional stability.

“Its deployment does not contribute to collective efforts to strengthen regional stability and instead serves to threaten the status quo,” Hernandez said.

China had also recently established what it calls an “Air Defense Identification Zone” over several islands disputed by Japan and China.

The United States government said that it will not recognize the zone. Two unarmed B-52 bombers flew over the zone for at least an hour and did not identify themselves, a report by CNN citing an unnamed US military official said.

Secretary of State John Kerry said in a statement that the establishment of the zone will “increase tensions in the region and create risks of an incident.”

Read Next
US embassy closed Thursday for Thanksgiving
EDITORS' PICK
LTO’s P500-M deal for screws draws scrutiny
Smart reinforces superiority with best speed and mobile video experience in PH
Every Filipino home can now be a smart home with realme TechLife
Nestlé Philippines’ ‘NESCAFÉ Plan’ bags Grand Anvil at PRSP 56th Anvil Awards
New 3,045 COVID-19 cases push PH total active cases to 40,074
How to lose a PH genius: Wesley So officially a US citizen
MOST READ
Robredo on Sara Duterte leading poll surveys: Why are Filipinos drawn to leadership of this kind?
How to lose a Filipino genius: Wesley So officially a US citizen
Hugpong Ng Pagbabago fully supports Sara Duterte says confidant Davao del Norte governor
Duterte on his ‘faults’: ’I just have cases of extrajudicial killings’
Don't miss out on the latest news and information.