US Ospreys show worth in Philippines aid effort 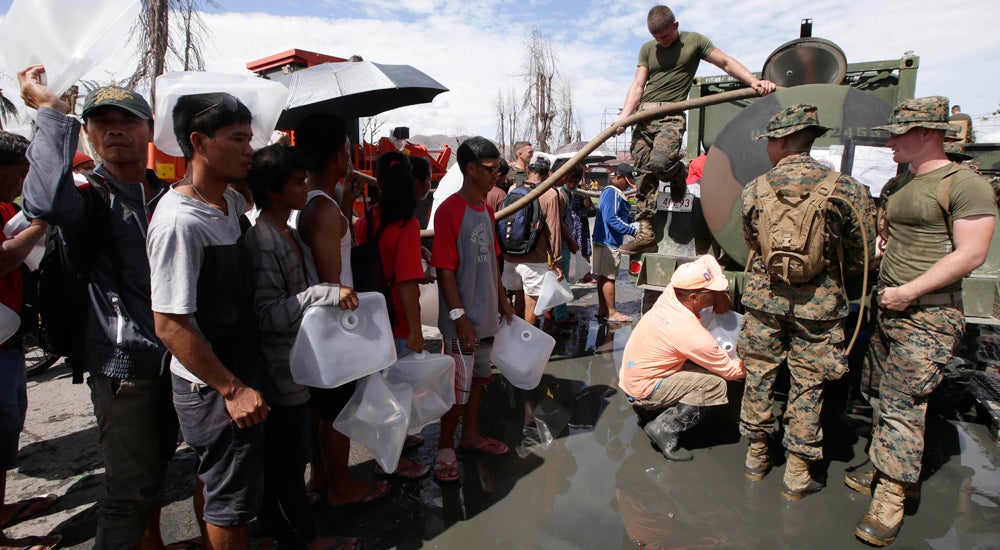 CLARK AIR BASE, Philippines – The U.S. Marines’ newest and in some quarters most controversial transport airplane is showing the world what it’s got — for the sake of the victims of Typhoon “Yolanda” (international name: Haiyan),  and perhaps its own future.

The MV-22 Osprey, which can tilt its rotors to fly like either a helicopter or a fixed-wing aircraft, is delivering tons of aid every day to people affected by the Nov. 8 storm. The U.S. military’s humanitarian effort presents a golden opportunity: The Marines want to show how safe and versatile the Osprey is, countering critics and helping to persuade allies to buy their own.

Anger over the decision to base the aircraft on the Japanese island of Okinawa, the only place in Asia where they are permanently deployed, has made the aircraft the poster boy of anti-military sentiment there. Opponents cite noise problems and high-profile crashes in the early days of the Osprey, though its safety record since then has been better than any other helicopter-type aircraft.

With its unique design, the Osprey can fly faster and farther and carry heavier loads than the helicopters it replaced.

“Anything that’s different generates criticism. And the Osprey is different,” says Capt. Travis Keeney, who has been flying the aircraft for six years. “There’s nothing like it in military history.”

He’s taken the Osprey to Iraq, Libya and Africa, but this is the biggest humanitarian mission he’s ever been involved in. He wants his aircraft to shine, and his squadron has a lot to prove.

Keeney’s first orders Tuesday appear to have little to do with humanitarian aid. His crew is told to sit tight and prepare to transport an Israeli general.

The Osprey has proven itself in battle in Iraq and Afghanistan, and that has gotten the attention of militaries around the world — including Israel’s.

“Everybody wants to see it,” Keeney says.

But that plan is scrapped, and by 10:30 a.m., Keeney’s Osprey and five others delivering aid are on their way to a busy drop zone in Borongan on the island of Samar. They will make as many runs as they can to pick up and offload supplies.

Keeney’s day usually goes about 12 hours — with nine or 10 in the pilot’s seat and six of actual flying. Shifts earlier in the crisis were longer, but even now he doesn’t have time for breaks. He takes whatever food he needs with him on the Osprey. If he needs to relieve himself, he has an empty bottle.

As the plane, now bursting with boxes of supplies from the U.S. Agency for International Development, gets close to the disaster zone, the crew chief lowers the back ramp, turning the rear of the Osprey into a huge window onto the bright blue Gulf of Leyte and the devastated Samar coastline below. The crew assesses the damage along the way to see what other places they should try to reach.

Borongan, the first stop, was not so badly impacted, and the drop is organized and efficient. Local men run to the Osprey, grab the boxes and race back to the loading area. In 15 minutes, the Osprey is airborne again.

Lifting off in an Osprey feels much like it does in any helicopter, but when it switches to airplane mode it’s much faster, zooming forward like a jet.

Guiuan, the next stop, has suffered far more damage and is much more hectic. It is so congested with aircraft that Keeney decides to bag it and fly to the USS George Washington, a short hop offshore. Within a half hour, the Osprey is refueled and back in Guiuan, with supplies to drop off from the carrier.

From there, the Osprey flies to Tacloban, which was almost completely flattened by the storm and has become a hub for aid efforts.

The area around the runway has become a tent city populated by nongovernmental organizations, military planners, emergency workers and local people desperate for supplies or a flight out.

Helicopters buzz the skies like mosquitoes. Most of the military aircraft here are American, but an Austrian C-130 taxis by as Keeney’s Osprey begins to load up.

Keeney takes off as soon as the plane gets more fuel and more supplies, including 10 bags of rice. En route to Guiuan, over the eastern Samar town of Salcedo, Keeney sees a distress signal spelled out on the ground.

He decides to make a quick drop.

As soon as the ramp goes down in LZ Salcedo, dozens of men, women and children rush the plane, ignoring instructions from the crew. They climb on board and fight each other to get the bags of rice.

This is what crew chief Michael Anthony Marin was told wouldn’t happen — that the chaotic early days of the aid effort were over. This is his first flight since getting to the Philippines, and his first real-world operation as a Marine.

“I was scared as hell,” the 27-year-old says later. “You could see the desperation in their eyes. I was worried about the safety of my crewmembers.”

Fearing the situation could get out of control, the crew cranks up the Osprey’s propellers, creating a deafening roar and a strong rotor wash on the ground. With no more rice to grab and the wind on the ground making it hard even to stand upright, the crowd disperses and the Osprey flies off.

The next stop is only about a mile away. This time, townspeople run to the plane, form a chain gang and quickly offload the USAID boxes — no panic, no fighting.

“I guess a situation like this just brings out the best and the worst in people,” Marin says. “You want to keep them going, but there is only so much you can do.”

It’s just after 7 p.m. Keeney is tired after the day’s run, and disappointed about the morning delay.

“We got out, conservatively, about 3,600 pounds of supplies today,” he says. “We had six Ospreys flying, so altogether that’s about 25,000 pounds. But we could have done a lot more if we had had that extra time.”

About two weeks after the typhoon, Marines say things are improving.

Maj. Brian Psolka, the operations officer for the Keeney’s Osprey squadron, VMF-265 of the 3rd Marine Expeditionary Battalion, says that roads previously inaccessible to ground transport have opened up, so the Ospreys are under less pressure to make drops outside of the more established landing zones, like Guiuan and Tacloban. He said mob scenes like the one at LZ Salcedo are now rare because logistics and civil order have improved significantly.

Rebuilding will take a long time, but a degree of stability is beginning to return to the millions affected by the monster storm, which killed at least 4,011 people, left more than 1,600 missing and displaced hundreds of thousands more who went days without basic necessities.

“We hope they get back on their feet as soon as possible,” Psolka says, adding that the Ospreys will leave as soon as the Philippines government says they are no longer necessary. He also says he is convinced that the Ospreys have proven their mettle, delivering more supplies and moving more people to otherwise inaccessible places than would have been possible with regular helicopters or fixed-wing aircraft.

Marin, the crew chief, is ready to stay as long as needed despite his “crazy” first day.