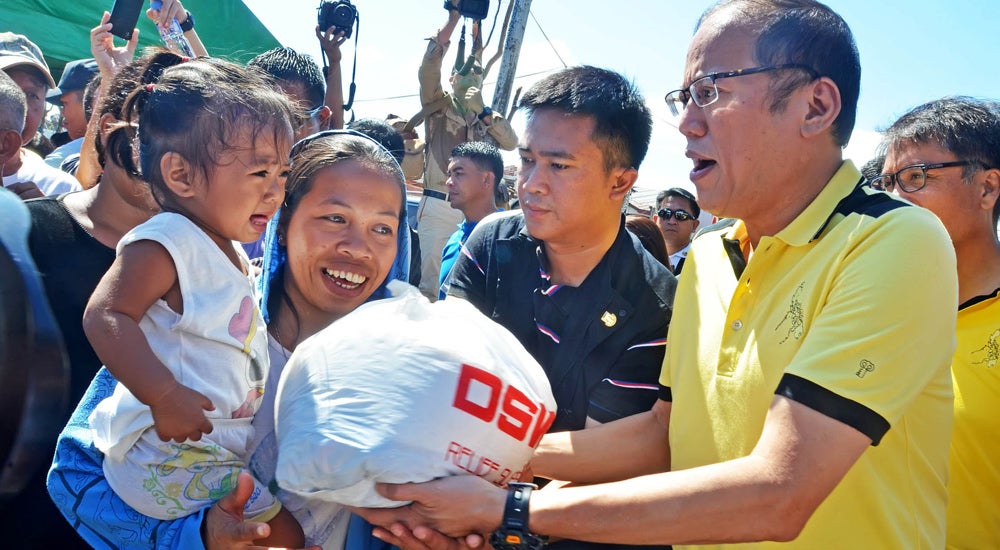 SHEER RELIEF. A survivor of “Yolanda” breaks into a smile of relief as she welcomes a care package from President Aquino at the Palo municipal hall in Leyte province. The President visited areas devastated by the supertyphoon a week ago to reassure victims of government support. ANDREW TADALAN

TACLOBAN CITY—There may still be millions of people in the Visayas who have yet to receive any assistance 10 days after Supertyphoon “Yolanda” swept across nine regions of the Philippines, the United Nations said on Monday.

But Leyte Rep. Ferdinand Martin Romualdez blamed the delay in assistance to the survivors on “bureaucratic red tape.”

Romualdez, whose district, including Tacloban City, was pulverized by Yolanda (international name: “Haiyan”), urged the creation of a department or an emergency management authority to be headed by a Cabinet-rank official to replace the current response system that failed to hit the ground right after the storm.

“The current setup has proven to be inadequate in preparing our country from major calamities, which we will inevitably have to face,” Romualdez said in a privilege speech in the House of Representatives on Monday.

“This [new] department will drastically reduce, if not totally eliminate, the bureaucratic red tape that caused the delay in the delivery of relief goods to the victims and clearing operations in the affected areas,” he said.

The UN Office for Coordination of Humanitarian Affairs (Unocha) found that “375,000 of around 13 million people who were affected by the calamity were able to receive food relief, but 2.5 million people were still in need of food assistance.”

Matthew Cochrane, spokesman for the UN humanitarian office, discussed the agency’s assessment of the response made eight days since Yolanda struck on Nov. 8.

Cochrane, in an interview with the Inquirer on Sunday, said the assessment was based on data gathered and consolidated as of Nov. 16 from various local and international organizations involved in humanitarian work in areas ravaged by Yolanda.

Cochrane said the data showed that around 3 million people were displaced by the typhoon, more than 70 percent of them in the Western Visayas provinces of Aklan, Antique, Capiz, Guimaras, Iloilo and Negros Occidental.

Reports from the Department of Social Welfare and Development (DSWD) indicated that some 2.3 million, or 18 percent of those affected by Yolanda, could be found in Eastern, Western and Central Visayas.

Cochrane said the UN agency had observed that although there might be more than enough food assistance coming from different sources, there were constraints related to the transportation and distribution of the relief goods.

He cited “bottlenecks” that caused incessant delays in distribution of relief to survivors, particularly in the six provinces in Western Visayas.

“Most of them have yet to be reached, unlike in Tacloban, which has been reached several times by relief operations,” Cochrane said.

He noted that during the first few days of the response, damaged roads and airports caused delays in the distribution of relief goods by UN member-countries.

Cochrane said part of the delay in distribution was the insufficient number of vehicles and storage facilities.

“Having a ready stock of fuel for vehicles also proved a challenge during the first few days of extending help here,” he said.

But private local and international organizations, the government, particularly the Armed Forces of the Philippines (AFP), are now contributing both fuel and vehicles for the distribution of food, he said.

Sixty UN member-countries and international private organizations are involved in providing both relief goods and “mobility to reach more beneficiaries,” he said.

The UN humanitarian agency recommended the setting up of warehouses in Cebu province and other nearby locations in the Visayas not much affected by the typhoon for the storage of relief goods, Cochrane said.

“This, plus the arrival of eight additional trucks from the Armed Forces of the Philippines could increase the food distribution capacity to 400 metric tons per day,” he said.

But even with these developments, the UN report said 60 percent of survivors in Capiz province had not received food assistance while in Iloilo province, the towns of Carles, Estancia and Concepcion had not received sufficient help.

The UN humanitarian office recorded 234,760 houses damaged during the typhoon, and 243,583 completely destroyed.

Some 1,000 tents in Tacloban City and 500 tarpaulins to be used as temporary shelters in Medellin town in northern Cebu were distributed by the Philippine government and UN member-countries, the report said.

In addition, 500 “shelter repair kits” have been given out to residents of Bantayan Island, Cebu.

But the UN agency noted that despite being provided these materials, few of the survivors had the initiative to build their temporary shelters.

Cochrane said the inaction of the rest could be due to the frustration they felt in the aftermath of the typhoon.

“We have to understand that the extent of their devastation extends beyond the physical,” he said. “They lost their livelihoods, too.”

The United Nations considers Yolanda one of the strongest typhoons to hit any place on earth in wind strength and in the damage it caused.

“The task of rebuilding here would be monumental for everyone,” he said.

Another UN official urged a halt to bickering and finger-pointing in the aftermath of Yolanda.

Bernard Kerblat, the UN High Commissioner for Refugees representative for the Philippines, told a news conference in Manila that this is not the time for arguing over discrepancies between the UN death toll estimate and that of the Philippine government.

The United Nations last week reported an early estimate of more than 4,000 people dead from Yolanda, a figure disputed by the Philippine government, whose count at the time was 3,600 dead.

“We have to think of those who died,” Kerblat said. “Unfortunately, there’s not much we can do but offer them a dignified burial, without entering into a polemic of how many of them have died.”

At the House on Monday, Romualdez defended local governments from criticism that they had been remiss in responding to their constituents’ needs in the aftermath of the storm.

“Our local government officials are at the forefront of every problem that may arise in their respective communities. But how can they be mobilized if they don’t have the right resources that may be needed in this kind of situation? Worse, how can we expect them to respond in any kind of situation if they, too, are victims of the same tragedy?” Romualdez said.

Local governments need to be strengthened to be able to handle all kinds of circumstances, he said.

Romualdez urged the passage of legislation that would give local officials more resources to build safer, adaptive and resilient communities.

He also noted that the World Risk Index had ranked the Philippines third among the most vulnerable to disasters.

“I strongly recommend that we pour our resources preparing for these major calamities. We need to procure more updated rescue and relief equipment like helicopters, ships, vehicles and other related modern technology and apparatus,” he said.

Romualdez called on the House to pass his resolution to allow the spending of P30 billion from the Special Purpose Fund for the rehabilitation of the towns ravaged by Yolanda.

He also urged passage of the bill that would create a Typhoon Yolanda Assistance and Development Commission so that P25 billion could be appropriated for livelihood, rehabilitation, and infrastructure support.

He said tax incentives should be given to people and private corporations that would help rebuild the typhoon-ravaged towns and cities.

“This tax holiday bill comes with an invitation for all entrepreneurs and companies to establish their businesses in these calamity-stricken areas. While they may be starting from scratch, we assure them of utmost cooperation to provide a business-friendly climate,” Romualdez said.

He also proposed the creation of a Typhoon Yolanda Development Integration Assistance Program that would ensure the continued education of children in communities laid to waste by Yolanda.

And he appealed to the national government and to local leaders to help the displaced find alternative homes and livelihood so that they could get back on their feet.—With a report from Jaymee T. Gamil