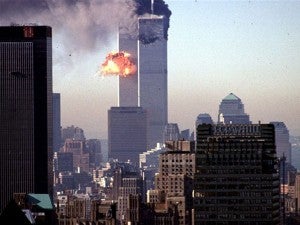 10 YEARS AFTER 9/11. A hijacked commercial plane crashes into the World Trade Center in New York City on September 11, 2001. The all-out war on terrorism unleashed by Washington after the attacks marked a turning point in US-Arab relations and nowhere more so than in once top ally Saudi Arabia. AFP FILE PHOTO

WASHINGTON—Osama bin Laden is gone, but 10 years after the September 11 attacks the United States is still entangled both by his legacy and the impact of its own avenging actions after the 2001 terror strike.

The horror unleashed in New York and Washington traumatized the public and sparked a “war on terror” that would stretch the legal system, send American soldiers to die in Muslim lands and eventually drain US global power.

In anguished days of mourning after September 11, the phrase “everything has changed” seemed on everyone’s lips as the country united, then went to war, starting with bin Laden’s Afghan lair.

A decade on, nearly 100,000 US troops remain in Afghanistan and almost 7,500 US and allied soldiers have died there and in Iraq in wars financed by borrowing that sent America deep into the red.

So is there a case to be made that bin Laden, despite dying a diminished figure gunned down by Navy SEALs, won his showdown with the United States?

Did an audacious attack, which lured America into combat in the Middle East, end a century of US dominance?

On September 10, 2001 the world’s sole superpower basked unchallenged, awash in cash, after a growth spurt that now seems an elusive golden age.

But that era ended in an instant when an American Airlines jet smashed into the World Trade Center’s north tower.

Exploiting America’s freedoms, bin Laden had sent suicide operatives armed with box cutters and fundamentalist zeal to hijack airliners and steer them as fuel-laden bombs at the epicenter of US economic and political power.

It was the most spectacular terror attack in history. A disbelieving world watched the New York landmark felled in a murderous cloud of ash and steel as the Pentagon blazed after another direct hit.

On a new day of infamy, nearly 3,000 people died and America’s cherished feeling of safety within its shores was history.

“Bin Laden did have one big victory,” said Julian Zelizer, a political historian at Princeton University.

“Simply as a pure terrorist action, as a pure criminal action, it was a success. It really revealed a million holes in American national security, it was devastating psychologically to the nation, devastating in human costs.”

Fear flashing across president George W. Bush’s face when he learned of the attacks at a Florida school epitomized the deep trauma into which his nation plunged.

Some analysts believe the swift declaration of a global war on terror, set off consequences that did more damage to America than the actual attacks.

“There was a moment caused by national post-traumatic stress disorder which led the United States to buy into the misguided, over-the-top response of the Bush administration,” said David Rothkopf, visiting scholar at the Carnegie Endowment for International Peace.

“Panic, overreaction (and) compromising our values… did more damage to the United States than bin Laden did.”

“That’s the objective in terrorism — you take an act and hope it triggers a response in your enemy that actually does more damage than the initial act.”

In a cathartic address to Congress, Bush said no terrorist would ever rest safe again, anywhere, a vow that underpinned a doctrine of preventive war.

The result: a 10-year quagmire in Afghanistan, an invasion of Iraq justified by weapons of mass destruction that were never found which estranged Washington from its allies, and prisoner abuses in Abu Ghraib that sullied the US image abroad.

Harsh interrogations of terror suspects — torture to critics — tore at the fabric of US constitutional law.

The political system remains convulsed over how to try “enemy combatants” and suspects languish in Guantanamo Bay, which a new president, Barack Obama, tried, but failed to close.

Trillions of dollars in unfinanced wars left the United States weakened when a debt bubble burst and triggered the worst recession since the Great Depression.

But bin Laden’s long-term legacy is more complex: though Al-Qaeda inflicted misery, it did not “change everything.”

The US political system did not break — at least not because of bin Laden — though some argue the anti-terror Patriot Act curtailed basic freedoms.

Though people complain about shuffling shoeless through airport security, America made itself safer since 2001 by strangling Al-Qaeda in a secret drone war and remaking its intelligence apparatus.

And remarkably, there has not been another spectacular attack on US soil, though luck has played a role in foiling some airborne plots and the fear of terrorists wielding weapons of mass destruction lingers.

Bin Laden’s dreams of an international jihad failed to materialize. The Arab Spring also suggests many Muslims reject his ideology.

The United States retains the capacity, though, as Libya has shown, a diminished desire, to project force abroad.

And the greatest threat to American dominance may not lie in bin Ladenism, rather long-term trends of decline that predated the Al-Qaeda chief.

“It was interesting and revealing but it was not the end of anything.”

In fact, the economic, diplomatic and strategic rise of China, India and Brazil could cause US power to wane more than bin Laden did.

Western preeminence is also threatened by gaping deficits and ageing populations in a decade scarred by recessions and high unemployment.

“The biggest threat we have to our national security is our debt,” said Admiral Mike Mullen, chairman of the Joint Chiefs of Staff in 2010.