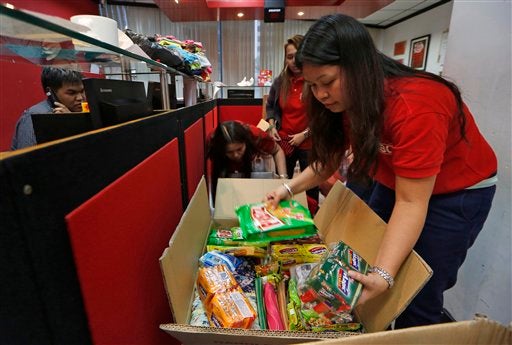 In this Wednesday, Nov. 13, 2013 photo, Filipino staff members pack boxes of donations from overseas workers at an express company in a Hong Kong shopping mall as the relief goods will be shipped to the survivors of Typhoon Haiyan in the Philippines. They gather in California churches, in Hong Kong shopping malls, at prayer vigils in Bahrain and on hastily launched Facebook pages. Philippine overseas workers, cut off from home after a super-typhoon killed more than 2,000 people, are coming together to pray, swap information and launch aid drives. (AP Photo/Kin Cheung)

HONG KONG—They gather in California churches, in Hong Kong shopping malls, at prayer vigils in Bahrain and on hastily launched Facebook pages. Philippine overseas workers, cut off from home after a super-typhoon killed thousands, are coming together to pray, swap information and launch aid drives.

Above all, many of the more than 10.5 million Filipinos abroad — some 10 percent of the country’s population — are desperately dialing phone numbers that don’t answer in the typhoon zone, where aid is still only slowly trickling in and communications have been largely blown away.

“I call again, and I keep trying and trying and trying but no one answered,” said Princess Howard, a worker at a money transfer business in Hong Kong, of her attempts to reach her 62-year-old grandfather and nine other relatives in the Leyte region that was flattened when Typhoon Yolanda (Haiyan) hit one week ago.

Sending $21.4 billion back home last year alone, Filipino overseas workers are a major part of their country’s economy, with their remittances equaling nearly 10 percent of gross domestic product. Spread out over more than 200 countries, they work as nurses in Europe, sugar cane laborers in Malaysia, housemaids in Hong Kong and construction workers in the oil-rich Middle East.

Hong Kong alone has some 133,000 Filipinos, mostly domestic workers who tend to gather in local parks on Sundays, a day off. There are so many Filipinos in Hong Kong, that an entire shopping mall catering to them has developed — to buy goods from home and, crucially, wire money back to families. Howard, 18, works in a remittance agency at the mall and says that days after the storm, her family is still ringing missing relatives’ mobile phones 10 to 20 times a day with no luck. “Sometimes I lose hope. And sometimes I just carry on doing it.”

For Filipinos abroad, the price of earning a living for family back home has always been separation, and for many, that has never been felt so keenly over the past week as they watched helplessly from afar as the typhoon ripped apart entire communities.

“If only I had magic, in one click I would be there,” said 30-year-old Jeff Ilagan, an assistant pastor at the Filipino Disciples Christian Church in Los Angeles, California, who is from Leyte and whose wife and three young children are still in their village. As the storm hit, he endured a sleepless night worrying after receiving a text message from his wife saying, “Pray for us.”

Ilagan’s family survived and he is desperate to see them but he can’t leave the U.S. for a full year or he will invalidate his religious worker visa. Instead, the young pastor is throwing himself into fundraising efforts at his adopted U.S. church, organizing special offerings and weekly rummage sales for typhoon relief.

“What I can do here to help them is to pray for them and participate in any efforts to help,” he said

In Kuwait City, 27-year old pharmacist Dindin Ponferrada has tried dozens of time to reach her family in Barugo, about 20 kilometers west of the worst-hit city of Tacloban, but all lines are cut.

“Every time I check Facebook, I see people posting pictures of the devastation and asking for help and aid,” she said.

In a display of unity in Bahrain, local Shiite Muslims joined the Filipino workers’ community in a candlelight vigil Tuesday. A 48-year-old domestic worker, Maria Lisa Bartolome, one of about 50,000 Filipino workers in the Gulf state, said she joined another vigil at the main Catholic church in the capital Manama. Bartolome’s family lives in Manila and rode out the typhoon, but she has not heard from relatives in Cebu.

“We are praying not to have another typhoon,” she said.

The Philippines has long been known as a nation that exports its people, starting with the political strife that began in the 1970s under dictator Ferdinand Marcos and continuing through the decades as the country’s economy faltered even as other Southeast Asian nations prospered.

The country in recent years has made an impressive economic comeback, but overseas workers still remain one of the pillars of the economy.

Over the decades, the trend has created a far-flung and yet close-knit diaspora.

“All Filipinos working abroad share the desire to sacrifice to do something to help their families back home. So Filipinos also tend to help each other wherever they find each other, because they all share this spirit,” says Ted Laguatan, a Philippines-born lawyer in San Francisco who specializes in immigration cases and has written essays on the Filipino diaspora.

That unity and its resulting network of churches and community groups has swung into action across the world in the past week.

Philippine-born Letty Desacola, who has called Australia home since 1979, was devastated when she heard that nine members of her extended family were dead.

The 61-year-old retired hospital employee who lives in the east coast city of Brisbane decided to focus on raising donations for survivors through a Facebook page she created.

“I thought I’m not going to sit feeling sorry and grieving because it’s not going to help. So what I did, I called a friend of mine in the shipping business and asked for help,” she said.

She was given a shipping container free of charge to fill with donated emergency supplies. A Brisbane storage company has donated a collection place. One local business has so far donated a ton of linen. Tents, clothes and tinned food are rolling in.

Overwhelming but not surprising, said Laguatan.

“Filipinos have an incredible resilience, an incredible ability to survive anywhere in the world,” he said. “We are used to hardship, from oppression to natural disasters, and we understand suffering.”