Filipino expats in US seek news after typhoon | Global News

Filipino expats in US seek news after typhoon 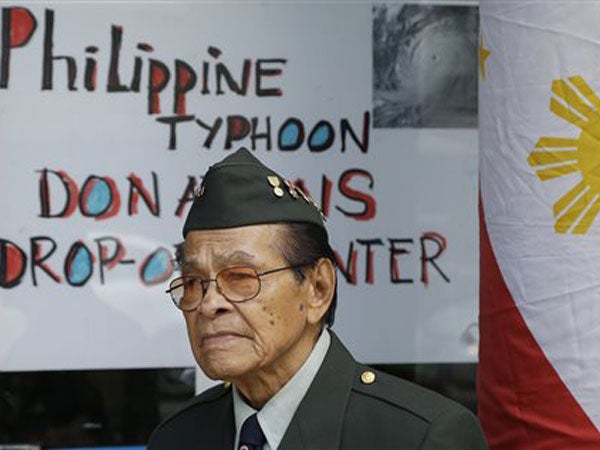 Former U.S. Army Private Alfredo Carino stands at the door of the West Bay Pilipino Multi-Service center in San Francisco while volunteering with other veterans to accept donations for victims of Typhoon Haiyan which struck the Philippine islands last week on Monday, Nov. 11, 2013. Typhoon-ravaged Philippine islands faced a huge relief effort that had barely begun Monday, as bloated bodies lay uncollected and uncounted in the streets and survivors pleaded for food, water and medicine. AP

LOS ANGELES—The last time Armi Go called her 81-year-old mother in the Philippine city of Tacloban, the rain from the approaching typhoon was so loud they could barely hear each other.

Go, a 59-year-old sales clerk in Los Angeles, urged her mother to evacuate, but the elderly woman brushed off Go’s concerns and stayed. Now she’s missing, along with Go’s brother and sister, and thousands of others caught in Friday’s devastating typhoon. Since then, Go has been desperately calling any friend or relative she can think of for news of her family—with no luck.

Around the United States, Filipino expatriates like Go scrambled to find relatives trapped thousands of miles away and to send money and supplies into an area where nearly all communication and transportation were at a standstill. In Southern California, home to the largest community of Filipinos outside the Philippines, fundraising efforts from 5K walks to church rummage sales attracted hundreds as word spread about missing loved ones and harrowing tales of survival.

Many worried that their homeland would be permanently crippled by the typhoon, which came just weeks after last month’s 7.2-magnitude earthquake in Bohol that killed 198 people. The US Census listed more than 322,000 Filipinos in Los Angeles County alone in 2010.

“The county just suffered a one-two punch. The United States can probably weather that kind of devastation, but not the Philippines. It’s just a poor country,” said Bing de la Vega, who is organizing relief efforts through the non-profit Philippine Emergency Disaster Relief Organization. “You can’t help but get emotional when you see the magnitude of the devastation.”

In New Jersey, expats gathered at Fiesta Grill, a Filipino restaurant in Jersey City, to watch a Philippine news channel via satellite.

One woman dabbed her eyes as she took in the devastation. Others boxed up donations of clothes, shoes and canned food at a direct shipping business to send to typhoon victims.

Adelia Ramos, 64, said she spent several days trying to reach family. She became emotional as she recalled getting in touch with them late Sunday.

“They are now safe, they are back in our province,” she said, breathing in sharply and waving away tears. “But, the worries that they had, they couldn’t get to our town, they had to walk for seven hours, and sometimes over dead bodies.”

A 5K run held Sunday in Van Nuys, north of Los Angeles, raised $7,000 in four hours, and another, larger, fundraiser was in the works for early December—maybe an invitation-only dinner at a Los Angeles restaurant, de la Vega said.

Churches were also rushing to get donations together. The Filipino Disciples Christian Church in Los Angeles raised $400 over the weekend between an impromptu rummage sale and a special offering at Sunday’s service. The 60-member church is continuing to collect goods for another rummage sale next weekend.

“We’re hoping to reach at least $1,000,” said pastor Einstein Cabalteja. “We’re not really a big church but we’re doing our best to help.”

Henderson, who came to the US 12 years ago, said her parents evacuated two days ahead of the storm with her 16-year-old brother, who has cerebral palsy. They returned to find their home standing, but Henderson’s aunt and uncle remain missing. The family heard through word-of-mouth that the elderly couple survived, but they lost their home and were living in a tent on the street.

Henderson is trying to figure out how to organize a search for her relatives and get them supplies and money.

“There’s no way to communicate with them. Somebody literally has to go to that island and search for them,” she said. “We’re trying to do something, because the news says that people there have had not food for four days now.”