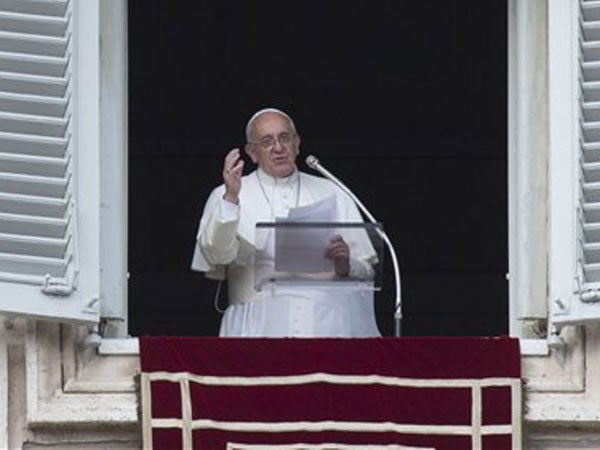 Pope Francis delivers his blessing during the Angelus noon prayer he celebrated from the window of his studio overlooking St. Peter’s Square, at the Vatican, Sunday, Nov. 10, 2013. The Pontiff has led tens of thousands of people at the Vatican in silent prayer for the victims of the typhoon that has ravaged the Philippines. The Pope told a crowd of pilgrims, tourists and Romans that he wanted to assure the people of the Philippines and surrounding region that he feels close to them. He lamented the high toll of dead and the enormous damage, then requested silent prayer for “our brothers and sisters.” Francis also said: “let us try to get our concrete aid” to those suffering from the storm. The Philippines has the largest number of Catholics in Asia, and Filipinos are one of Rome’s biggest immigrant communities. AP

VATICAN CITY — Pope Francis on Sunday asked Catholics to provide “concrete help” to the hundreds of thousands of people made homeless in the typhoon-ravaged Philippines, and to include them in their prayers.

More than 60,000 people joined the pope in his own prayer for the victims during his traditional Sunday mass in St. Peter’s Square, a day after he had tweeted his solidarity with the Catholic Asian nation.

The death toll from the super typhoon that wiped out entire towns in the Philippines could soar well over 10,000, authorities warned Sunday, making it the country’s worst recorded natural disaster.

“Sadly, there are many, many victims and the damage is huge,” the head of the Roman Catholic Church said, speaking from a third-floor window of the papal palace. “Let’s try to provide concrete help.”

Secretary of State Pietro Parolin, the pope’s right-hand man, said in a message to President Benigno Aquino that Francis was “deeply saddened by the destruction and loss of life caused by the super typhoon (and) expresses his heartfelt solidarity with all those affected by this storm and its aftermath.”

“He is especially mindful of those who mourn the loss of their loved ones and of those who have lost their homes,” the message said.

“In praying for all the people of the Philippines, the Holy Father likewise offers encouragement to the civil authorities and emergency personnel as they assist the victims of this storm.”