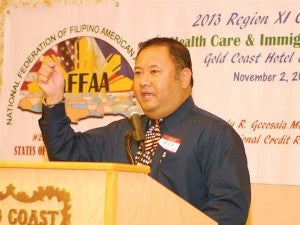 LAS VEGAS—Leaders of the Filipino-American community urged its members to support immigration reform by calling their representatives in Congress.

“What can we do today? It’s very simple. If you do not take your phone and encourage Congressman Heck to do something about immigration reform, then you’re not doing your job,” Filipino-American community leader Rex Velasquez said.

Velasquez, a local immigration attorney, spoke about HR 15 in his turn as guest speaker at the National Federation of Filipino-American Associations (NaFFAA) Region XI conference in Las Vegas last Nov. 2.

“We need to call our Republican counterparts. Immigration is broken and we need to fix it,” community leader Rozita Lee said at the same event.

The office of US Rep. Heck, meanwhile, confirmed it has “heard from a number of Filipino-American community leaders on the issue of immigration reform.” Heck, a Republican, is representative of Nevada’s third congressional district.

“Congressman Heck appreciates and values their insights and we look forward to hearing from them again on this, and any other issue that is of concern to the community,” the office’s Communications Director Greg Lemon told Asian Journal.

At the NaFFAA event, Velasquez explained, “What we are trying to encourage them to do is to bring full on debate [on HR 15]. The magic number is 218 votes. Right now there are 203.”

HR 15 or the The Border Security, Economic Opportunity, and Immigration Modernization Act was filed by Democrats in the House of Representatives last Oct. 2. The bill is based on the bipartisan bill calling for sweeping overhaul of the country’s immigration system that was passed in Senate last June. Heck is not co-sponsoring HR 15 despite indication that he wants immigration reform done soon.

“I don’t know that he has had a chance to review and make a decision on HR 15, [but] he wants the House to take up immigration reform legislation,” Lemon said.

In a recent statement, Heck expressed frustration on reports that House Republican leaders may not move immigration reform legislation to the House floor for a vote this year.

“There are bills that have passed Committee that could be brought to the floor next week, but the House Republican leadership may punt the issue until 2014 for political reasons. That’s very disappointing,” Heck said in his Oct. 25 statement.

“I have spent countless hours meeting with community members and addressing town hall meetings on the topic of immigration reform. There is no doubt in my mind that reforming our immigration system is right and necessary and I remain committed to enacting real solutions that will fix our current broken system,” he added.

“I will continue to urge the House leadership to move forward on immigration reform with all possible haste,” Heck also said.

“Based on his previous statement, he believes strongly that immigration reform legislation should come to the floor for amendment and a vote. He has said all along that now is the time to address this critical issue,” Lemon explained.

The communications director also said that Heck’s co-sponsoring of HR 15 “would not do anything” to bring to bring it to the floor for a vote.”

The congressman would rather see separate bills addressing immigration to be voted on as indicated in his Oct. 25 statement. Among the bills he is referring to include those that relate to border security, internal security, hi-tech and investor visas, guest worker program, and Dreamers.

(With a report from Robert Macabagdal/AJPress)