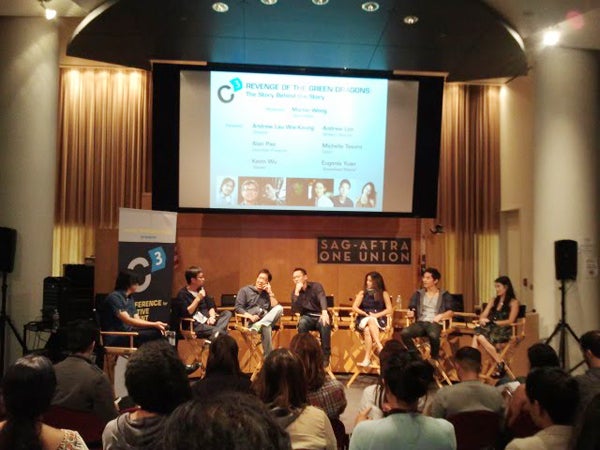 LOS ANGELES–It may not exactly bring the same hype and star power as San Diego or New York’s Comic Con, but the 3rd annual Conference for Creative Content or C3 is arguably unique and geeky in its own right.

This whole day event, which took place on October 26 at the Screen Actors Guild-AFTRA headquarters, gave artists an opportunity to network with Asian Americans in the entertainment industry and learn how to improve their craft while embracing their cultural heritage.

Attendees were able to choose from different workshops such as screenwriting, directing and producing, animation, creating visibility and creating online strategies. There were Q&As after each discussion.

Lau, along with his cast and crew, talked about the process of shooting their latest movie, “Revenge of the Green Dragons,” an ‘80s gangster movie produced by Martin Scorcese. Lau and Scorcese have previously worked together on creating the Oscar-winning movie “The Departed.”

Michelle Tesoro, a Filipino American who served as an editor of critically acclaimed shows like “The Newsroom” and “House of Cards,” said that she could not refuse the chance to work on this project.

“It’s not every day that you get to work with an all-Asian cast,” Tesoro said. “There’s something special about that.”

Lau, who is directing in the United States for the first time, shared how the story of Asian immigrants trying to fit into American society inspired him to make this movie about Chinese gangsters in the ‘80s.

“We talked to a lot of Chinese Americans in New York and when we asked them if they had any regrets moving to America, they said that they wouldn’t do it again,” Lau said. “It’s sad because they couldn’t speak Chinese. They’re stuck in the middle.”

Albert Kim, who currently works as the showrunner for the show “Nikita” featuring Maggie Q., was one of the speakers at the workshop called Writing for Diverse Characters in TV, which featured writers from shows like “The Walking Dead,” “How I Met Your Mother,” and “Hawaii Five-O.”

Kim lauded the event for bringing people who can provide a unique perspective as an Asian American from inside a writer’s room.

“I think it’s great. The more events that we can have like this where we can kind of share our experiences because it’s so hard even getting through this business on your own and the more you can support each other and draw on each other’s shared experiences to help you get through it, the better,” Kim said. “Being able to meet other people who have gone through the same thing but also look like you and know what you’ve gone through is invaluable.”

In the afternoon, Osmanski and Pak were part of a five-person panel that talked about increasing visibility for Asian Americans in the industry and how engaging a broader audience can help in getting more projects shown in mainstream culture.

Osmanski, who has been featured on mainstream shows like “Grey’s Anatomy” and “Allen Gregory,” said that Asian Americans need to realize that they deserve to work in the industry as much as anyone else despite the existing obstacles for minorities.

“For me, the change has been one of realizing that I am, that I feel more entitled and I think that’s a really good thing. I’ve never duly apologetic about who I am as a person or an actor, but I feel more entitled now to be at a place where I am in my career and also to continue to look forward,” Osmanski said. “And so for me, it’s just the process of realizing that we deserve to be here, we should have always been here and it’s a matter of waking other people up to it.”

Pak, who worked on the Batman/Superman comic books, said that lead actors still drive the revenue for blockbuster movies.

“What we need are superstar Asian actors because that’s what drives the funding of movies,” Pak said. “It’s never enough for the work to be the first Korean American, X, Y, Z or the first Asian American this or that. Nobody cares. Literally, nobody cares. It just has to be really great.”