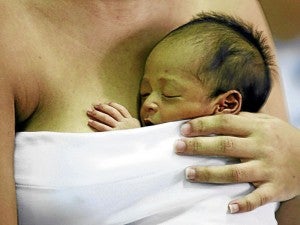 COLOMBO, Sri Lanka—The Philippines can teach neighboring countries a thing or two on saving newborn babies from dangerous illnesses and keeping them healthy throughout their childhood.

It was cited at the World Health Organization (WHO) Biregional Workshop on Scaling-up Nutrition for its program dubbed “Unang Yakap” (First Embrace), which has significantly curtailed deaths among Filipino infants.

During the three-day conference held in Colombo, Filipino health experts shared with their counterparts from the Southeast Asian and Western Pacific Region the three-year-old program that not only improved infant nutrition but also addressed high rates of infant mortality.

A social marketing campaign, “Unang Yakap” is a main component of the Essential Newborn Care (ENC) protocol piloted in November 2008 at the Quirino Memorial Medical Center.

The four-step protocol, derived from solid research evidence, requires the following in sequence: the immediate and thorough drying of a newborn, early skin-to-skin contact with the mother, properly timed cord clamping and nonseparation of the baby from the mother for early breast-feeding.

The protocol was actually contained in a voluminous WHO document on essential care of the newborn, but the Philippines was the first to encapsulate it into a “user-friendly” and “time-bound” guideline for health workers, said Dr. Mariella Castillo, technical officer of the WHO representative office in the Philippines for Maternal and Child Health.

The implementation of the guideline, which was developed into a policy in December 2009 by the Department of Health, is expected to bring down the number of infant deaths in the Philippines by at least 50 percent and boost exclusive breast-feeding by 90 percent, Castillo said.

“Unang Yakap” highlights the importance of immediate and exclusive breast-feeding, which tops the list of 23 interventions preventing childhood mortality under the age of five.

“That’s our contribution to global health because the process that we went through was scientifically rigorous,” Castillo told the Inquirer in an interview on the sidelines of the WHO biregional conference.

The “user-friendly” ENC protocol put together by the Philippines is also being considered as a “template” for newborn care, at least for the Western Pacific region, she said.

Dr. Tommaso Cavalli-Sforza, regional adviser in nutrition at the WHO Regional Office for Western Pacific in Manila, said the “Unang Yakap” program being implemented in the Philippines and which could be replicated in neighboring countries also confronted  the problems of infant mortality and malnutrition.

“That’s precisely why I mentioned it as an example of a good program, which the Philippines piloted and scaled up. And now it’s worth telling the story for other countries,” Cavalli-Sforza said in a separate interview.

During the media workshop here prior to the biregional conference, he cited Philippine practices as among the best in combating malnutrition in infants.

The Philippines is among 42 nations that account for 90 percent of global deaths of children under five years of age, according to Cavalli-Sforza.

Over 40,000 Filipino newborns die every year, with the majority of them dying in the first two days after birth. Newborn deaths account for 37 percent of the 82,000 Filipino children that die annually.

Sepsis (or blood infection) and pneumonia are usually the main cause of death among Filipino babies, accounting for 26 percent.

On August 11, Castillo, representing the Philippines, was given at least 15 minutes on stage to present its success story in nutrition interventions. The other presenters were the representatives of Vietnam, Thailand, Bhutan, Cambodia and Sri Lanka

In her presentation, Castillo said the need to implement the ENC protocol in Philippine hospitals became urgent following an outbreak of neonatal sepsis in a public hospital in the capital in 2008.

The outbreak occurred at the Ospital ng Makati, where 34 healthy babies succumbed to blood infection in June 2008.

Two years following the implementation of the protocol at the Ospital ng Makati, where about 4,000 babies are delivered annually, the number of newborn deaths and sepsis have dropped from 6 to 2 percent.

The exclusive-breast-feeding rate among mothers and babies discharged from the hospital was at 89 percent, and those who continued breast-feeding after a month was at 69 percent, Castillo said.

Now, the ENC protocol has been incorporated in the policies of at least 12 state-run hospitals, and a number of private hospitals have also taken the initiative to implement the guidelines, according to Castillo.

But there is still room for improvement, she said. “The 12 hospitals implementing the guidelines are not enough to see a population effect,” she said, noting that only 44 percent of Filipino babies were being delivered in health facilities.

As for improving the rate of exclusive breast-feeding, which is still at a dismal 34 percent, Castillo said the Philippines could take a leaf from Cambodia, which launched an extensive five-year Communication for Behavioral Impact Strategy on the feeding of infant and young children.

One of the components of its strategy included a TV soap opera, “Taste of Life,” which ran twice a week from late 2005 to early 2006. Composed of about 100 episodes, the TV drama revolved around maternal and child health issues, among others.

Cavalli-Sforza said a soap opera with the same theme could also become a hit among Filipinos, many of whom, he observed, had the habit of watching telenovelas.