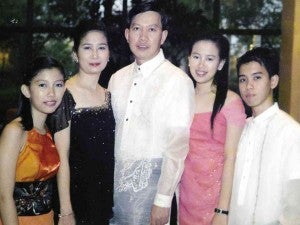 SAN PEDRO, Laguna, Philippines—The remains of Rizalina Camia-Bunyi, the doctor killed in the Oct. 28 car crash described by Chinese authorities as a “terrorist attack,” were finally flown back to her family in Imus City in Cavite on Friday.

The body, placed in a “beautifully made” wooden casket arrived at the Ninoy Aquino International Airport at around 10 a.m., according to Bunyi’s father, Rodrigo Camia.

Despite threats from Supertyphoon “Yolanda” (international name “Haiyan”), Camia said the flight did not encounter any delay.

Rizalina, a 55-year-old obstetrician, was with her husband Nelson, a pediatrician, and two daughters in Beijing when a car plowed into a crowd as they were near the Tiananmen Square. Nelson sustained a fracture while daughters Francisca Ysabel, 23, and Mikaella, 21, suffered less serious injuries.

The Bunyis returned to the Philippines on Nov. 2. Two days later, Nelson and Mikaella had undergone an operation, which turned out fine, according to Camia.

Interviewed by phone, Camia, 84, expressed gratitude to the Chinese government and the Philippine Embassy in China for looking after the family after the attack.

He said Nelson and the daughters stayed in a nice hotel in China and were provided security escorts, until their return to the Philippines.

“My only regret is losing my daughter too soon, but I have no hard feelings towards the Chinese government,” Camia said in mixed English and Filipino.

Rizalina’s wake would be at the Camias’ home in Barangay Bayang Luma IX in Imus City, where the Bunyi couple shared a clinic. The interment is tentatively scheduled on Wednesday next week.