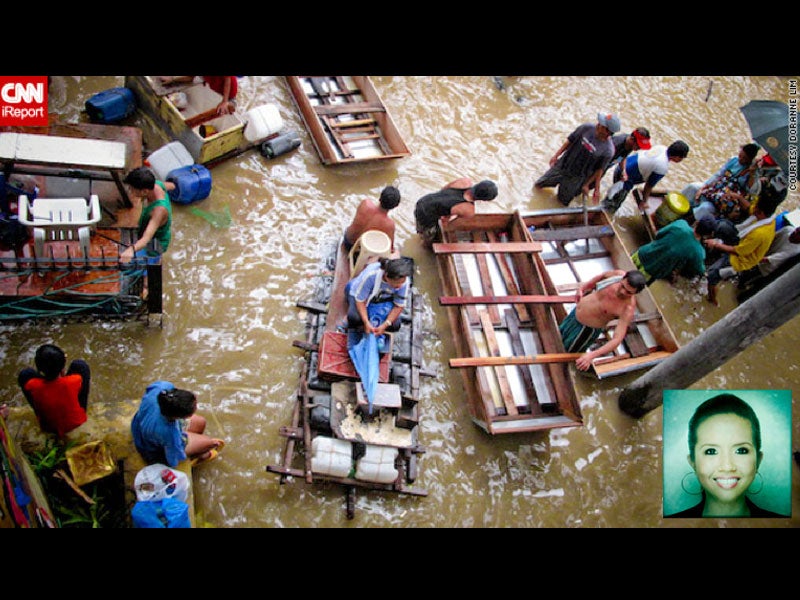 MANILA, Philippines—Lawyer Doranne Lim was taking photographs during an inspection of the flood-damaged Hall of Justice in Pasig City in September 2009.

Little did she know her snapshot of residents wading through floodwater spawned by Typhoon “Ondoy” (Ketsana) would be chosen by CNN as second in its five best examples of photojournalism from 2006 to 2011.

Lim was then documenting a visit to the Hall of Justice by then Supreme Court chief justice Reynato Puno when she captured on film the hardship of the flood-stricken residents of Pasig City.

She sent her photographs to CNN iReport and she would later be interviewed on phone by the international news network as her photographs were shown for the next 24 hours.

Topping the list of CNN’s best five was a photograph of a flood victim in Pakistan by AlizehImtiaz, a Pakistani filmmaker who covered the calamity and distributed relief goods in 2010.

In third place is a picture of firefighters shrouded in smoke, captured by professional photographer Chris Honeysett during the 2010 San Bruno explosion in California.

To mark the 5th anniversary of CNN iReport, the five best examples of photojournalism in its five years are being showcased on its website at ireport.cnn.com. iReport is the citizen journalism initiative of CNN that allows people from around the world to contribute pictures and videos of breaking news in their respective countries.CNN receives thousands of submissions daily.

Lim is a lawyer working at the Supreme Court’s Public Information Office. Aside from her regular legal tasks, she documents the activities of the high tribunal even those held in the provinces, like the Enhanced Justice on Wheels.