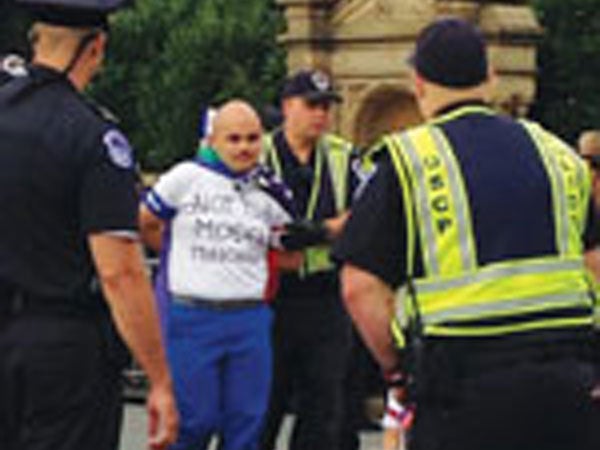 WASHINGTON, DC—”No, I wasn’t surprised. I was expecting to be arrested,” said Gregory Cendana, as he reflected on being arrested during the immigration reform rally dubbed “March for Dignity and Respect” held last Oct. 8.

Inspired by others who were willing to take a stand for what they believe in, Cendana decided he wanted to follow suit.

“If others are willing to risk facing arrest, I wanted to be able to do that, too, especially as a young Filipino gay man,” he said.  “I felt like it was an opportunity to really show Congress that we mean business and we want to make sure immigration reform passes.”

As thousands of protesters were busy chanting, dozens of Capitol police handcuffed them before leading them off to police wagons. Those arrested were charged with crowding obstruction and incommoding, Capitol police said.

Cendana recalled, “That weekend, there were more than 200 events that happened across the country, and this was kind of a culmination of different activities.”

“I knew that going to the rally, I would be participating in the exercise of civil disobedience. People knew that before they went there. So we blocked off a street in front of the Capitol.

“We were put in a facility and I was there for more than 12 hours. (Then) they asked us whether we would accept the fine and I said yes. The fine was $50.”

Although Cendana cannot confirm the exact number of Filipino-American organizations present, he believes he was the only Filipino arrested.

Cendana said he was thrilled that the arrests brought national attention to the cause of immigration reform.

“The aim was to get a lot of people engaged, not only in the rally, but in civil disobedience. This is one of the bigger civil disobedience demonstrations in support of immigration reform. Basically it was a big rally of more than 20,000, and 200 of us led the march to the Capitol.”

Cendana admitted it was not his first arrest. “I was arrested in front of the White House back in 2009, also on account of immigration reform.”

So, will he consider doing it all over again?

“I will always be open to it,” he said, “especially over this next couple of months, I know the conversation around immigration reform is going to pick up.”