PH to send fresh batch of peacekeepers to Golan Heights 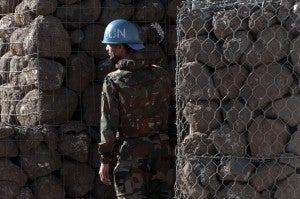 A UN soldier stands next to a shelter inside a UN base near the Quneitra crossing between the Israeli-controlled Golan Heights and Syria. AP FILE PHOTO

MANILA, Philippines – The Philippines will send a fresh batch of troops to a peacekeeping mission in Golan Heights in December to replace the current forces serving there.

He said President Benigno Aquino III agreed to send a new batch of troops after the United Nations accepted the Philippine government’s conditions, including additional protection for the peacekeeping forces such as equipment for chemical warfare.

The current Filipino peacekeeping forces in Golan Heights would be serving for more than a year by December, exceeding the usual six months of duty. They were deployed in November last year and were supposed to return home last May, but it was delayed several times pending the government decision and the United Nations.

The military said 25 of the peacekeepers currently deployed in Golan Heights were abducted in two incidents in recent months. One was also injured in a “wayward indirect fire” amid fighting between Syrian rebels and the government.

Raymond Quilop, assistant secretary for Strategic Assessment, told reporters that the security situation would be assessed every six months before sending new troops.

“So for example, if within the next months it [security] will deteriorate, there is a possibility of a pullout. But if not, the rotation will continue,” he said.

About 300 Army soldiers will replace the current force at Golan Heights.