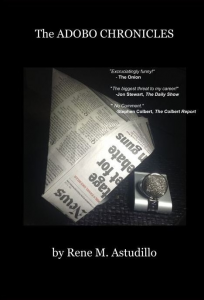 Rene Astudillo is a serious guy who gets involved in serious causes.

He was with the Filipino Task Force on AIDS in the 1990s when the epidemic was emerging as a major concern in the Filipino and Asian communities in the US.

He was executive director of the Asian American Journalists Association at a time when the US media was dealing with the dramatic changes wrought by the rise of the Web.

Today, he is leading a foundation focused on educating the public about lupus.

Now, he’s published a book that Jon Stewart of The Daily Show says is “the biggest threat to my career,” described by The Onion, the popular news publication as “excruciatingly funny.” And Stephen Colbert of The Colbert Report even said –

Well, okay, they’re all fake reviews of Astudillo’s hilarious “The Adobo Chronicles” from the masters of fake news – or as he puts its “unbelievable news.”

“The Adobo Chronicles” is a compilation of Astudillo’s faux news reports found on AdoboChronicles.com which he describes as “Your source of up-to-date Unbelievable News.”

There’s a report on a herd of pigs that staged a protest in front of the Philippine Senate.

Another item tells of Oprah Winfrey buying the Zurich boutique where she felt insulted by a staff member who suggested that a $38,000 handbag may be too expensive for her.

Then there’s the story of how disgraced US politicians, Anthony Weiner and Eliot Spitzer, both of whom got embroiled in sex scandals that ended what had been promising political careers, have each applied for Philippine citizenship.

President Aquino is quoted as saying, “They would be a welcome addition to the Philippine political circus – I mean circuit.”

Of course, some of the clowns of Philippine politics could also fit right into the circus that is U.S. politics – which could be yet another “unbelievable news” item.

Humor and laughter are, to be sure, a way of dealing with what the two countries have been going through. I still remember the old ‘Sic O’Clock News’ show that poked fun at Philippine politics in the 1980s.

These days, in the US, The Daily Show and The Colbert Report have done more to help people understand, and cope with, an increasingly chaotic and seemingly directionless political system.

“The Adobo Chronicles” is a welcome addition to humor-as-a-way-of-coping-with-crazy-politics tradition, this time from a Filipino American perspective.

“Each post is based on an actual news item I encountered in the newspaper, radio or television,” Astudillo, who describes himself as “a news junkie” writes in the introduction to The Adobo Chronicles.

“So, in a sense, each post is factual, only it is further enhanced by the working of my imagination.”

Astudillo’s stint as executive director of the Asian American Journalists Association in the 1990s gave him a ringside view of the dramatic changes in US media.

“As many consumers of news these days would complain about, I , too, have started to develop some misgivings about news and how it is delivered – especially with the onset of Internet technology, where the race to be first sometimes results in errors, inaccuracies or distortions of fact,” Rene writes.

Not only is there an emphasis on speed, he adds, “Consumers are not only subjected to some of the most insignificant news, but are also bombarded with the same news over and over, only made worse by the barrage of pundits.”

It came to a point, he continued, that he found himself “talking back at the television newscasts or at pundits.” That became “a form of entertainment for me.”

And now, it’s entertainment for all of us.