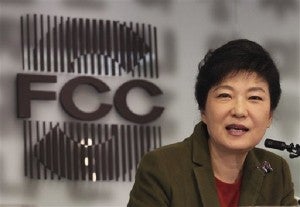 SEOUL—Even the newly elected leader of this rising economic superpower acknowledges how Filipinos’ affection for Koreanovelas and K-pop groups have helped bridge the two cultures.

South Korean President Park Geun-hye expressed confidence that South Korea and the Philippines would be able to improve its economic, political and military ties with President Benigno Aquino III’s visit to her country.

Hosting a state dinner in Mr. Aquino’s honor at the Blue House on Thursday night, Park said her meeting with the President was able to “significantly expand the fabric of trust and shared understanding about our journey toward a new future for the development of both our countries.”

“I join the people of Korea in offering our sincere welcome to you, Mr. President, as the first leader to pay a state visit to Korea since my government was inaugurated,” Park said as she led the toast for Mr. Aquino.

“The special bond that President Aquino has long had with Korea indeed has helped bridge our hearts through trust and confidence,” she said.

The Korean leader said her country and the Philippines had become “true partners for prosperity… across the whole range of areas.”

“Filipinos today share similar emotional experiences with their Korean counterparts through Koreanovela, through K-pop and through Korean food,” she said, noting that more than 1 million Korean tourists visited the Philippines last year.

She said Koreans were “being enchanted not only by the beauties of your nature, but also by the warmth of your people.”

Park, the first female chief executive of South Korea, cited the role of the President’s late father, Sen. Benigno Aquino Jr., during the Korean War in the 1950s.

Then only 17, the martyred former opposition leader traveled to Korea as a young war correspondent for The Manila Times.

“He roamed the fields of battle together with some 7,400 Filipino troops who were sent to Korea. And through his writings, that would later become history, ‘let the world know how the war was unfolding,’” Park said.

“As I see it, that sacrifice and dedication have been passed down to the next generation, paving the way for our precious meeting today.”

Aquino urges Koreans to invest in PH; blames most problems on Arroyo