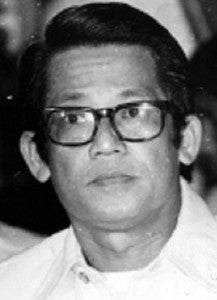 South Korea will present a plaque of appreciation for President Aquino’s father, the assassinated opposition leader Sen. Benigno Aquino Jr. (in photo), who worked as a news correspondent during the Korean war, on the second day of the Philippine President’s state visit. INQUIRER FILE PHOTO

SEOUL, South Korea—A recognition from the Korean government honoring his martyred father and namesake will be among the highlights of President Aquino’s two-day state visit here.

The President is scheduled to fly here on Thursday upon the invitation of President Park Gyeun-hye, the newly elected leader of this fast industrializing country considered to be the third-most vibrant economy in Asia.

Aquino said he would not be canceling the state visit to South Korea, expressing confidence that the government has responded adequately to the quake-devastated regions in the Visayas, particularly Bohol and Cebu, which suffered a 7.2-magnitude earthquake on Tuesday.

“I will be going to Bohol and Cebu tomorrow and if possible other areas and if the assessment is that there are a lot of things that are not being taken care of, then we will reconsider the visit,” Aquino said.

The two countries have long had historical ties, deepened by the Philippines’ gesture of sending of combat troops to help defend Korean democracy during the Korean War in the 1950s.

Aquino said Korea had extended the invitation to him three times, beginning from the term of President Lee Myung-bak, Park’s predecessor.

“If we suddenly cancel the visit, we might delay our good relations with Korea,” Aquino said.

Aquino and his official delegation, who will be taking a chartered Philippine Airlines flight, will be welcomed by top Korean officials led by Cho Tae-yul,  the second vice minister of foreign affairs, at the Seoul Air Base in Seongnam-si, Gyeonggi-do.

After offering a wreath at the Memorial Tower of the Seoul National Cemetery, Aquino will proceed to the Blue House, Korea’s seat of power, where a memorandum of understanding on defense cooperation will be signed by officials of the two countries.

Park will host a state dinner on Thursday in honor of the President.

The second and last day of Aquino’s visit will start with a wreath-laying ceremony at the War Memorial, after which he will be presented with a plaque of appreciation for his late father, the assassinated opposition leader Sen. Benigno Aquino Jr., who worked as a news correspondent during the Korean war.

He will also speak before a group of Korean businessmen to invite them to invest in the Philippines.—With a report from Nikko Dizon

Aquino to proceed to South Korea after checking on Bohol, Cebu