Noli Me Tangere in Manhattan

NEW YORK—Last year, Noli Me Tangere, the opera, was staged in Chicago. I heard about it and wanted to see it but couldn’t and wished that it would be staged here as well. Fortunately like-minded New York-based Filipinos had the same idea. And so it was that over a recent weekend this month, the Foundation for Filipino Artists, in celebration of its 25th anniversary, presented it at the Kaye Playhouse that is part of Hunter College (where I teach, coincidentally). The foundation, headed by its founder Aida Bartolome, partnered with a committee to raise funds, whose chair was Loida Nicolas Lewis. As the latter pointed out in a speech welcoming the audience to the last performance, New York hadto have its own production. In 1888, it was the culmination of his transcontinental train journey begun in San Francisco. He stayed for three days before boarding a passenger ship to Liverpool. 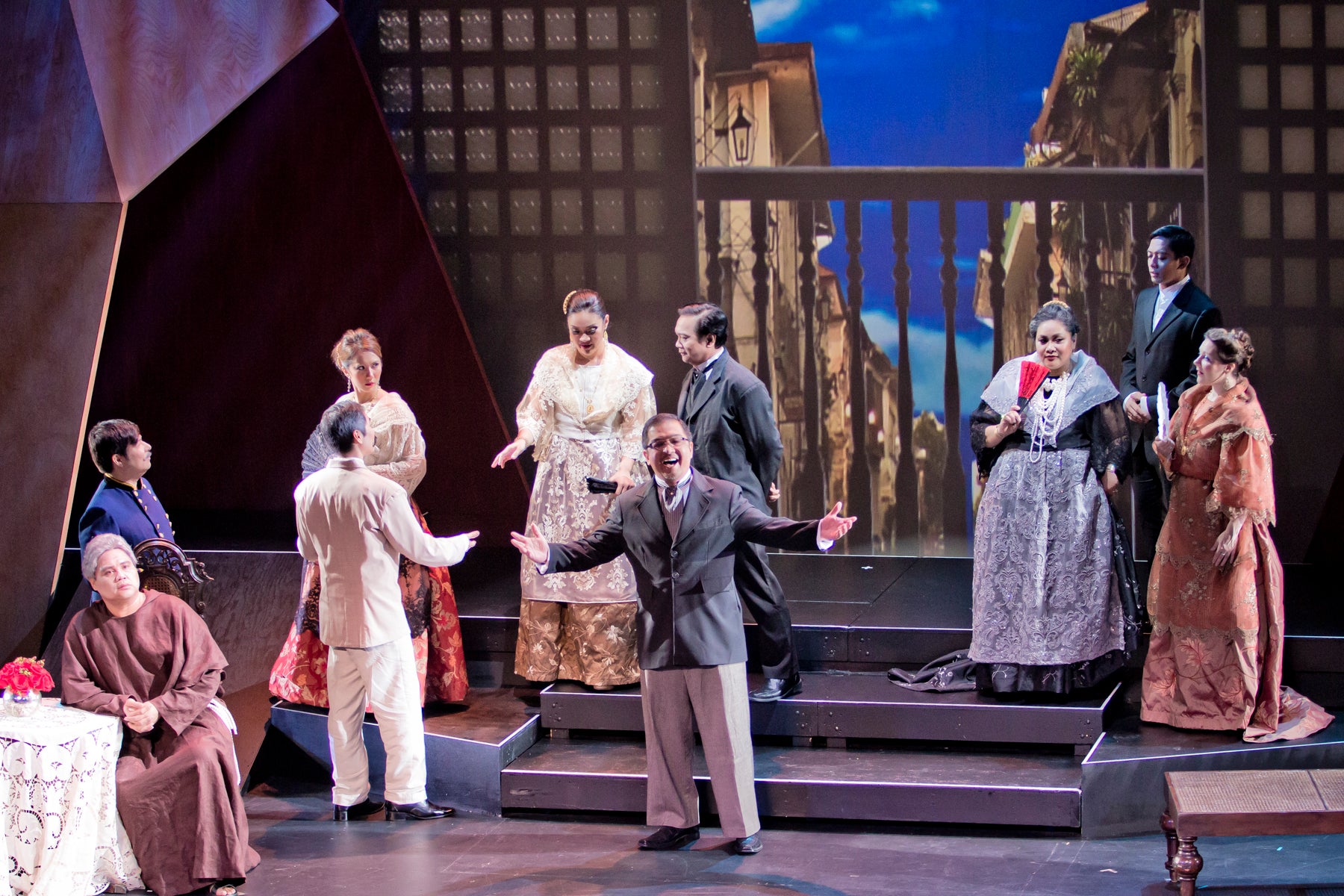 A scene of the party at Don Santiago’s Binondo home, welcoming Ibarra back. Photo/Project Fury13

Working to stage this opera was a creative team made up of gifted veteran professionals, from the artistic director and composer/conductor Michael Dadap and dancer/choreographer Kristin Jackson, from set and costume designer Jerry Sibal to the singers, all of whom have had considerable experience and success in regional venues in the US and in Europe. Sal Malaki, for instance, singing the role of Ibarra, is with the Los Angeles Opera; Antoni Mendezona (Maria Clara) has sung to critical acclaim in New York; and Andrew Fernando as Padre Damaso has appeared with the New York City Opera (which, alas, just closed its doors permanently) and at the Cultural Center of the Philippines.

The opera debuted in Manila almost 60 years ago, the music composed by Felipe Padilla de Leon, and the libretto written by Guillermo Tolentino. Both de Leon and Tolentino were later honored by the Philippine government as National Artists, the former in music, and the latter in the visual arts. Tolentino is the artist who sculpted what is probably the most famous statue in Philippine academe, the Oblation, that greets visitors to the University of the Philippines campus at Diliman in Quezon City.

Both the singing and the orchestral accompaniment were first-rate and the staging went off without a hitch. The libretto however was a different story, literally and figuratively. The challenges of adapting Jose Rizal’s first novel, with its characters—many of which now live on in the popular imagination—and layers of irony, satire, and political allusions, are formidable. Certainly not everything in the novel can or should be transferred to the stage, a different medium altogether where, while relying on the written word, must also be visually rendered. Tolentino’s adaptation suffers in its attempt to present a narrative arc that concentrates mainly on the tragic love between the idealistic Ibarra and the beautiful if somewhat frail Maria Clara. Most likely too, the pressure of keeping the adaptation to a manageable time made the librettist’s task even harder.

The portrayals of Padre Damaso, Ibarra, and Maria Clara are solid enough, and prepare us for the tension that arises from Damaso’s bitter dislike of Ibarra. Nevertheless, some omissions are inexplicable. Padre Salvi and Elias, so central to the novel, here play much reduced roles. In the book, Salvi lusts after Maria Clara and engineers the faux rebellion that implicates Ibarra and makes him a fugitive. In the opera we have no inkling of the friar’s Machiavellian stratagems. Elias, a noble if enigmatic counterweight to Salvi, has a history that ties him in to Ibarra. Their debates on whether revolution is the answer to the Philippines’ enslavement—powerful material for dueling arias—Elias’s willingness to help and even die for Ibarra: none of these are dealt with or even suggested. 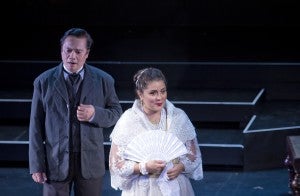 One of the book’s many strengths is its satire. Who can forget the portrait of Doña Victorina de Espadaña, the wealthy India who thinks she is superior to her own kind? The classic and hilarious catfight between her and Doña Consolacion, the Guardia Civil Lieutenant’s wife, would have made for a wonderful comic scene. And Rizal’s withering depictions of religious superstition and hypocrisy, voiced often by the village philosopher Tasio, are barely hinted at. Nor is the theme of education, Ibarra’s (and Rizal’s) passion, even brought up.

The last we see of Maria Clara in this opera is on her knees, donning a veil, symbolizing her life as a nun. But that is all. Her descent into madness within the claustrophobic confines of the convent, with regular, suspect, visitations by Padre Salvi, is excised. If any one scene in the novel seems tailor-made for an opera, it would have been the sight of the heroine on the convent roof, lamenting her fate in the middle of the night while a thunderstorm is raging and two soldiers patrolling the street below, who are taken aback by the sight of this madwoman and scared out of their wits. Maria Clara’s wretchedness would have been a perfect representation of the state of the country under Spanish oppression.

I suppose if one hadn’t read the novel, one could appreciate to a greater degree than I did this otherwise polished production, for which everyone involved is to be commended. While this adaptation falls short, its enthusiastic reception should encourage the Foundation and its partners to undertake, and even commission, similar endeavors. As for the possible complaint that had Tolentino deepened and lengthened his libretto, it would simply have been too long, let me just say that in art as in bed, it isn’t how long you make it, it’s how you make it long.