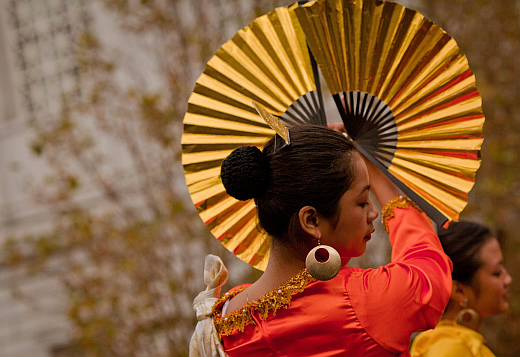 A performance at the first Filbookfest in San Francisco in 2011. PHOTO/Rick Rocamora

The first Filipino American International Book Festival, known as Filbookfest, was a big success two years ago. It was a fun, upbeat community celebration complete with a street fair, a Balagtasan and, of course, lots of food.

Filbookfest II, to be held Oct. 18-19 at the San Francisco Main Library, promises to be another not-to-be-missed gathering.  There will, again, be a Balagtasan, the entertaining verbal showdowns in verse made popular in the 1920s and 30s, featuring Vim Nadera and Mike Coroza.

Together with poet Teo Antonio, they were the biggest hit of the 2011 festival, Gemma Nemenzo, who started the Filbookfest and is one of this year’s organizers, says.

Food will again be a theme this year with authors Claude Tayag, Marvin Gapultos and Rene Astudillo. Tayag, one of the best known Filipino chefs today, will make a presentation, but it will be by invitation only given space constraints at Patio Filipino, she added.

In fact, Filbookfest II is going to be a tad smaller than the first. For one thing, there won’t be a street fair.

Among the featured writers this year are Lysley Tenorio, author of “Monstress,” a collection of short stories, Marivi Soliven, who published her first novel, “The Mango Bride,” winner of the Palanca Award; the poet Barbara Jane Perez and novelists Evelina Galang and Cecilia Manguera Brainard.

Of course, there will be books for sale and plenty of discussion on publishing and bookselling. A number of lessons from the first Filbookfest are worth noting.

Children’s books, including those written in Pilipino but with English translations, sold well. Cookbooks were also hot. On the other hand, she added, “scholarly books didn’t even move.”

Pricing is also an important consideration for booksellers, Gemma added.

Filipino Americans and Filipino immigrants may be eager to buy books from back home, but it’s a bad idea to assume they won’t be price-sensitive.

“Some Philippine publishers overpriced their products, thinking mistakenly that Filams will be so nostalgic that they will ignore the high prices,” Gemma says. “Well, most Filams go home to the Philippines and/or have relatives there to buy their books for them, so they know the prices. And they know the prices of books here – a thin book in newsprint can’t cost more than the new hardbound books here that sell for $25-$30.”

Self-publishing is big now, and getting bigger, and there will be a forum on that topic. Marketing will also be a focus.

After all, that’s “a major reason Filipino writers are not read – the lack of marketing, and both publishers and authors are at fault here.” Gemma says.

“In the ideal world, good books should just sell by themselves,” she explains. “In the less ideal, publishers should market books actively. In the real world, authors have to do the marketing themselves.”

But the Filbookfest won’t just be about books.

A documentary on the history of Filipino jazz directed by Richie Quirino based on his award-winning book, “Pinoy Jazz Tradition,” will be screened. There will be panels on book publishing and on the Philippine Eagle.

For more information, check out the Philippine American Writers and Artists, Inc. website at http://pawainc.com/filbookfest