Going global by helping the poor 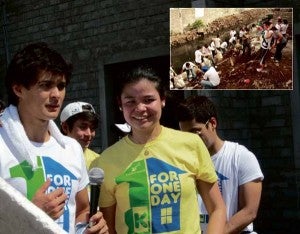 Alexandra Madrigal Eduque, 23, is now on her way to Amsterdam as a finalist—the first Filipino woman ever—in this year’s Global Awards for Fundraising.  An international awards program endorsed by national associations of fundraisers worldwide and organized by the Resource Alliance based in London, the ceremonies will be held on October 16 at the International Fundraising Congress in the Netherlands.

Alexandra, or Alex, as friends call her, is up against two other finalists from Italy and Australia for the Outstanding Volunteer Award category.  This award gives value to individual volunteers whose work creates significant impact on the fundraising success of an organization.  For Alex, it is her exceptional work in the past eight years as a youth volunteer for Habitat for Humanity  (HH) Philippines that drew international attention.

Fresh-faced Alex just graduated from Columbia University’s Barnard College in New York, majoring in political science and urban studies. But for one so young, Alex is already an “old pro,” a seasoned hand in the art of fundraising.  She describes herself as a social advocate and remembers submitting online, aside from her Scholastic Assessment Test (SAT) scores and school transcripts from the International School Manila, upon application for Barnard, an essay about how her grandmother, the late Chito Madrigal, daughter of industrialist Vicente Madrigal, “influenced my passion for philanthropy.”

At the age of 15, Alex was already thinking of how she could help those who have less in life and found her passion best served by being a Habitat volunteer.

She shortly founded the Habitat Youth Council.  Beyond volunteering, she wanted young people involved in Habitat for Humanity “to have a platform on giving”.  She first pitched the youth fundraising concept to Ayala Corporation’s Fernando Zobel, chairman of the Habitat for Humanity Capital Campaign Cabinet.  He liked the idea, and with his approval, Alex gathered her friends—Kaye Yang, Isabel Martel Francisco, Henny Zobel de Ayala, and her sister Michaela Eduque—as the initial core group that would map out fundraising activities.

They set about their tasks with stout hearts and gusto.  “We organized movie premier nights.  We sold Swatch watches exclusively made for Habitat (with the HH logo on watch buckles).”  The HH Swatches were sold for only a limited period but sales went through the roof.

Fast forward four years later, Alex and her friends in the Youth Council are running something like a business empire, for want of  a better analogy.  More aptly, a social advocacy behemoth that started as a small seed of an idea then grew far beyond their dreams.  They have raised more than P100 million and have mobilized over 8,000 youth volunteers to build 500 homes for Habitat.  The Youth Council, in addition to building Habitat homes for the marginalized sectors of Philippine society, is also into disaster relief as well as disaster preparedness, and to date has served more than 28,000 families.

Alex went on to start Move.org, a foundation that augments Habitat projects, but with a difference.  “We have introduced early childhood activities in poor communities, particularly early childhood education.” In Navotas, Move.org put up a school, now with 89 students and growing in numbers, from ages three to six years old.  And if one asks whether there are more young people like Alex, dedicating the prime of their youth to serious social advocacies, she says they are now 27, all under 35, in the Manila hub of Habitat for Humanity.

“We comprise the Global Shapers Community. We all have our own favorite causes but we are brought together by our desire to help the less fortunate among us.”

Alex up close is like just the ordinary young woman next door. She likes to have fun.  “Oh, I go out a lot!  I go to parties and like just hanging out with friends.”

But she and her close circle of friends would rather hang out “in our houses” rather than chill out in bars or dancing clubs.  She’s also a certified foodie. “I like checking out new restos, new food trends.”  And in the past four years, she’s been travelling.  Not exactly globe-trotting.  Just shuttling between New York and Manila.

Her eyes light up when she talks about the city that never sleeps.  “I wanted to thrive in New York.”  That’s why she went to Barnard.  “It’s right on Broadway.  The campus is right there.”

But Habitat, whether here or in New York, was always in her mind.  She was already with Habitat before Barnard and she often flew home to attend to projects.

This daughter of race car driver and banker Mandy Eduque and businesswoman ChuChu, nee Madrigal, never grew up in the lap of luxury, though her parents could have very well afforded their children’s every whim.  “We could have new toys, if our grades were 90+.”  Alex remembers the strict No-TV-during -schooldays policy at home.  “Only on weekends, with just one hour of TV a day.”

“All my life, I had to work for what I wanted.”

Philanthropy and public service is, however, a family tradition.  “With privilege comes responsibility.  That’s how we were brought up.”

For her ninth birthday, Alex asked her parents if she could have her birthday party at the White Cross Orphanage in Santolan.  When she turned 18, instead of having a lavish coming-out debut where she would receive 18 long-stemmed roses, she quietly built 18 houses for the poor.

Would she eventually try politics like her Tita Jamby, the former Senator who also ran for president in the 2010 elections?  She crinkles her nose.  “I’m too young to think about politics.  For now, I’m happy where I am.”

Alex first found out she made the finals to the 2013 Global Awards for Fundraising in the Outstanding Volunteer Category through an e-mail from Resource Alliance.  She thought it was surreal and that she was dreaming: “I never expected them to even notice me.”

In 2008, Alex won a Habitat award—the Nehemiah for Volunteering.  “It was a trophy FedEx-ed to me.”

This girl Alex is doing her share in her own little corner of the globe—and she has the world sitting up and taking notice.  She has also shown that one does not really have to be based abroad to be a global Pinoy.