Over 600 join ‘One Kapamilya Run’ in Burbank 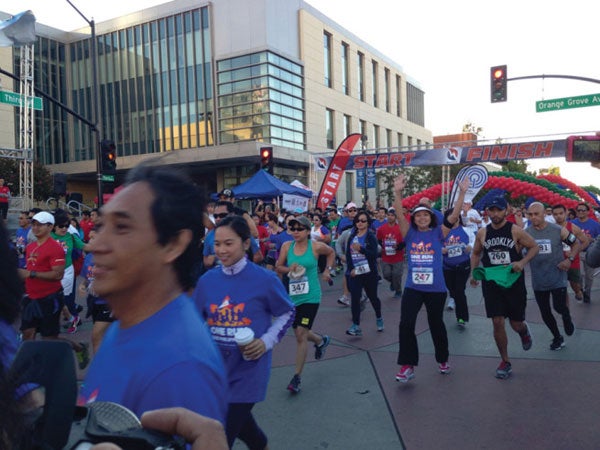 BURBANK, California—More than 600 runners from the 5k, 10k and kiddie run participated in One Kapamilya Run on October 5 in Burbank as part of the five-city advocacy run of ABS-CBN’s “One Run, One Philippines: Isang Bayan para sa Kalikasan,” which also took place simultaneously in the Philippine cities of Quezon, Cebu, Davao and Bacolod.

The race was also part of the celebration of ABS-CBN’s 60th anniversary on television, dubbed “Mga Kuwento ng Kasiyahan: The Grand Kapamilya Weekend.” The event helped to raise funds for the Bantay Kalikasan’s Green Initiative to be used for ecotourism projects in the Philippines.

One of the highlights of the event was Jake Cuenca, a Kapamilya actor, who also joined in with hundreds of participants to show support for the environmental projects in the country.

“It’s really a good event and nice to see all the Kapamilyas here. I’m happy that ABS-CBN decided to send me here in Burbank, so I’m thankful to them [to be invited on this event],” the actor said.

UCLA graduate student John Mering, who won second place in the 5k run, felt honored to be part of the race event. “I’m really happy to be part of this cultural event that brings more fitness to the community together,” Mering said.

“There’s a big health and fitness craze nowadays, so we want to keep promoting that [healthy lifestyle] among young and old people,” the former Filipino actor said. Los Angeles Consul General Hellen Barber-De La Vega said Filipinos must be involved in the various environmental advocacies in the Philippines.

“This is really an awakening and awareness for everybody because the Consulate is in full force [for this particular event] to promote and protect the environment in the Philippines, which is on top list of vulnerable countries to climate change, so there’s a real need for every individuals to help and do something for Mother Earth,” De La Vega said.

After the two-hour race event, the entertainment began with fun-filled activities and random prizes, including the special performance of Jake Cuenca. The One Kapamilya Run was organized by The Filipino Channel and ABS-CBN Foundation International.