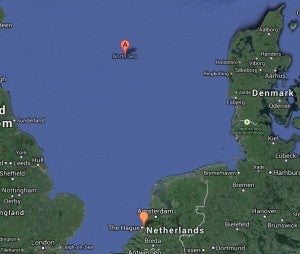 MANILA, Philippines—Two Filipino seafarers are among three missing when their ship sank after colliding with another vessel off the Dutch Coast on Monday, according to the Department of Foreign Affairs (DFA).

Citing information from the Philippine Embassy in The Hague, Assistant Secretary Raul Hernandez, the spokesman of the Department of Foreign Affairs, said the Dutch Coast Guard has been searching for missing crew members of the Maria following its collision with fishing trawler Texel 68 at the North Sea.

The two Filipinos were among five crewmen of the ship, at the time deployed to guard an oil drilling platform some 40 kilometers southwest of Den Helder, a Dutch navy port.

Two were immediately rescued while three were still missing, including the two Filipinos, as of Tuesday, Hernandez said.

“Our Embassy was informed that the Dutch Coast Guard is still searching for the missing crew members. Our Embassy continues to monitor developments on this in coordination with the authorities there as well as the shipping agency of the ship,” said Hernandez in a press briefing on Tuesday.

The Philippines is the global vessel-manning capital, supplying a quarter of the total number of seafarers currently deployed in the world’s oceans, according to information from the DFA.