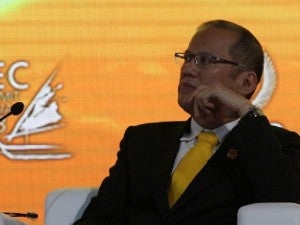 “Recovery in the global economic front is happening, but it is not very robust yet,” he told reporters Monday night, echoing the sentiments of fellow leaders.

“It could still recede. There is still a tendency [for countries] to protect their economies, to put up barriers, which lessen economic activity further [and] which will further stifle the recent reordering or re-improving economic conditions.”

Mr. Aquino was the “lead discussant” Tuesday in the economic leaders’ retreat on APEC’s “Vision of Connectivity in the Evolving Regional and International Architecture.”

Cooperation in “cross-border education and skills training” was a “fundamental step in aligning human resource development with economic growth and resiliency,” according to the Department of Foreign Affairs.

The President left for Brunei at 1:40 p.m. to attend the Association of Southeast Asian Nations summit and eight other smaller summits, including those with China, Japan, and the United States.

That’s where Mr. Aquino hopes to also engage up to four fellow leaders on the sidelines of the regional meet. He missed these opportunities at APEC where he intended to meet with the likes of Mexican President Enrique Peña Nieto.

No bilateral talks were arranged with Chinese President Xi Jinping in light of the ongoing maritime dispute between Manila and Beijing.

Even then, Mr. Aquino said, “both sides seem to have a common interest not to exacerbate the situation.”

The President described as “good news” the ongoing meetings intended to come up with a legally binding code of conduct in the South China Sea, a part of which the Philippines calls West Philippine Sea.

“I’m not saying we’re close to signing a code of conduct, but to convince everyone to talk about this again—and they’re really talking about it—I think we have moved closer to a solution,” he said.

Mr. Aquino also failed to arrange a meeting with Peruvian President Ollanta Humala, but said their informal “pull-aside” discussions more than made up for it.

“I think we have established a very deep relationship with them,” said Mr. Aquino, who joined Humala during the APEC CEO Summit on inclusive growth last Sunday.

Like Indonesian President Susilo Bambang Yudhoyono, Humala was invited by Mr. Aquino to visit the Philippines, which has been described by analysts as Asia’s fastest-growing economy.

Mr. Aquino said he shared the Philippines’ tourism campaign, in the hope that Peru could improve its tourist arrivals as well.

“We started out with three million but we are now between five and six million for this year. We are targeting 10 [million],” he told Humala.