Kerry assures CEOs on US role in Asia-Pacific 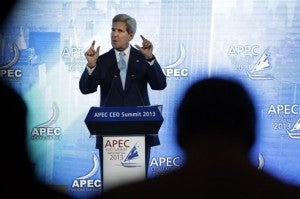 BALI, Indonesia — U.S. Secretary of State John Kerry is seeking to assure Asia-Pacific business leaders that nothing will shake America’s commitment to the region and that the current government shutdown in Washington will soon be over and forgotten.

Kerry told executives at an Asian economic summit in Indonesia on Monday that the shutdown is simply a “moment in politics.” He guarantees that America will move beyond it and will come back more resilient than ever.

Kerry is filling in for President Barack Obama, who was forced to cancel his participation to deal with shutdown.

Kerry joked that he had tried to replace a president when he ran for the White House in 2004 but that standing in for Obama was not what he had in mind.