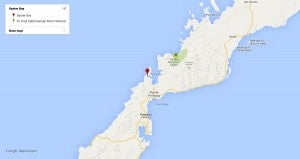 OYSTER BAY, Palawan, Philippines—At Naval Forces West headquarters here, the wooden planks that are the main platform of the Philippine Navy’s sole naval shipyard facing the West Philippine Sea are breaking apart and starting to surrender to the elements.

The planks have cracks and gaps wide enough to send a full-sized man straight into the clear blue waters below.

The crew of a naval supply ship, which was chanced upon by the Inquirer while visiting the facility on Friday, was loading up for a routine run to the Kalayaan Islands in the disputed Spratlys island chain and knew enough to be careful.

Defense officials are hopeful the decades-old plans to upgrade the naval facility into a major shipyard and naval facility will finally move. The  Oyster Bay development plans come as tensions are increasing over China’s aggressive assertion of ownership over the entire South China Sea, including parts of what the country calls the West Philippine Sea.

There has been an initial P500 million released to complete some major infrastructure components, including a 12-kilometer access road from the mainland.

Once completed, the facility would have an extended wharf to accommodate “at least four large naval vessels,” he said.

He cautiously avoided a conversation on the South China Sea conflict.

Peña said part of Navforwest’s capability upgrade would come from the Armed Forces of the Philippines’ modernization program. This include the installation of high-powered radar systems in strategic areas from north to south of Palawan facing the West Philippine Sea. The radar systems would allow them to closely monitor developments in the disputed areas of the Spratlys.

“The coastal watch program should allow us eventually to monitor our seas in real time,” Peña said.

At least four of these stations that form part of the radar network have already been upgraded, according to Peña.

He said they were hoping to add more radar stations, including one in the Sulu Sea to specifically watch over the Tubbataha Reefs, a United Nations Educational, Scientific and Cultural Organization (Unesco)-designated marine protected area.

Armando Lustre, head of Lustre Construction that won a Department of Public Works and Highways (DPWH)-administered contract to complete the 12-km road from the village of Macarascas to Oyster Bay, said they had begun the road work and were expecting additional funding for the third and final phase of the road development plan for the area.

Peña likened the Oyster Bay facility to “a mini Subic” once completed. Like the former US naval facility in Zambales, the bay has  physical characteristics that can host large warships.

“It is also ideal as a base for our Marines. It has vast jungles suitable for training,” Peña said.

Peña declined to comment on the suitability of Oyster Bay for use by  US naval ships under a new bilateral defense agreement that would allow the United States access to Philippine military bases, saying only that their facility would be “suitable for large warships.”

This US return to the country is part of its pivot to the Asia Pacific, a form of temporary basing in nations in the region.

The development of Oyster Bay has encountered resistance from the local community.

Around 10 years ago when the Philippine Navy began developing Oyster Bay and its naval reservation, all the villages around it rejected the facility, expressing this in a referendum conducted by the city government.

But Jane Villarin, a village council representive of Macarascas which hosts the newly transferred Navforwest headquarters believes the objections had been assuaged.

“I don’t think the community will resist the development of the naval base … we are used to them now,” she said.

Read Next
No Obama? No problem
EDITORS' PICK
Smart releases Hyun Bin’s second TVC
Give anti-terror law a chance, ditch misinformation – Defense Sec. Lorenzana
Military on heightened alert in Maguindanao after BIFF attacks
EuroMillions Superdraw: A lottery draw unlike any other is coming to the Philippines
Water remains our saving grace right now
For nation’s birthday, Trump slams the enemies within
MOST READ
NAIA Terminal 3 to open for international flights starting July 8
Hyun Bin: ‘I will meet with my Filipino fans first’
BI officers sacked for ‘fictitiously’ encoding Wirecard COO’s entry to PH
Anti-Terrorism Council’s first move: Make a list
Don't miss out on the latest news and information.