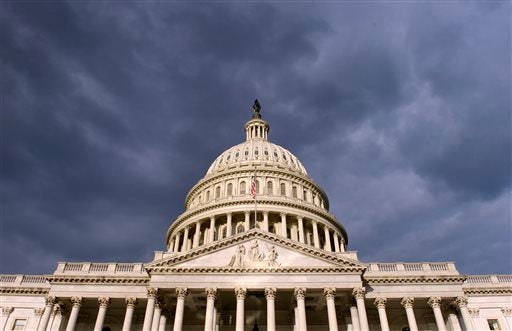 Dark clouds pass over the Capitol in Washington in this October 1 file photo. Political chaos from legislative gridlock, the government shutdown and an increasing fear of a default on its debts have deepened global unease that Washington is distracted from world affairs and scrambling to solve its domestic crises. AP

An unmistakable sense of unease has been growing in capitals around the world as the US government from afar looks increasingly befuddled — shirking from a military confrontation in Syria, stymied at home by a gridlocked Congress and in danger of defaulting on sovereign debt, which could plunge the world’s financial system into chaos.

While each of the factors may be unrelated to the direct exercise of US foreign policy, taken together they give some allies the sense that Washington is not as firm as it used to be in its resolve and its financial capacity, providing an opening for China or Russia to fill the void, an Asian foreign minister told a group of journalists in New York this week.

Concerns will only deepen now that President Barack Obama canceled travel this weekend to the Asia Pacific Economic Cooperation Forum in Bali and the East Asia Summit in Brunei. He pulled out of the gatherings to stay home to deal with the government shutdown and looming fears that Congress will block an increase in US borrowing power, a move that could lead to a US default.

The US is still a pillar of defense for places in Asia like Taiwan and South Korea, providing a vital security umbrella against China. It also still has strong allies in the Middle East, including Israel and the Gulf Arab states arrayed against al-Qaida and Iran.

But in interviews with academics, government leaders and diplomats, faith that the US will always be there is fraying more than a little.

“The paralysis of the American government, where a rump in Congress is holding the whole place to ransom, doesn’t really jibe with the notion of the United States as a global leader,” said Michael McKinley, an expert on global relations at the Australian National University.

The political turbulence in Washington and potential economic bombshells still to come over the US government shutdown and a possible debt default this month have sent shivers through Europe. The head of the European Central Bank, Mario Draghi, worried about the continent’s rebound from the 2008 economic downturn.

“We view this recovery as weak, as fragile, as uneven,” Draghi said at a news conference.

“At the moment, Washington is fighting over the budget and nobody knows if the country will still be solvent in three weeks. What is clear, though, is that America is already politically bankrupt,” it said.

Obama finds himself at the nexus of a government in chaos at home and a wave of foreign policy challenges.

He has been battered by the upheaval in the Middle East from the Arab Spring revolts after managing to extricate the US from its long, brutal and largely failed attempt to establish democracy in Iraq. He is also drawing down US forces from a more than decade-long war in Afghanistan with no real victory in sight. He leads a country whose people have no interest in taking any more military action abroad.

As Europe worries about economics, Asian allies watch in some confusion about what the US is up to with its promise to rebalance military forces and diplomacy in the face of an increasingly robust China.

Global concerns about US policy came to a head with Obama’s handling of the civil war in Syria and the alleged use of chemical weapons by the regime of President Bashar Assad. But, in fact, the worries go far deeper.

“I think there are a lot of broader concerns about the United States. They aren’t triggered simply by Syria. The reaction the United States had from the start to events in Egypt created a great deal of concern among the Gulf and the Arab states,” said Anthony Cordesman, a military affairs specialist at the Center for International Studies.

Kings and princes throughout the Persian Gulf were deeply unsettled when Washington turned its back on Egypt’s long-time dictator and US ally Hosni Mubarak during the 2011 uprising in the largest Arab country.

Now, Arab allies in the Gulf voice dismay over the rapid policy redirection from Obama over Syria, where rebel factions have critical money and weapons channels from Saudi Arabia, Qatar and other Gulf states. It has stirred a rare public dispute with Washington, whose differences with Gulf allies are often worked out behind closed doors. Last month, Saudi Foreign Minister Saud al-Faisal warned that the renewed emphasis on diplomacy with Assad would allow the Syrian president to “impose more killing.”

After saying Assad must be removed from power and then threatening military strikes over the regime’s alleged chemical weapons attack, the US is now working with Russia and the UN to collect and destroy Damascus’ chemical weapons stockpile. That assures Assad will remain in power for now and perhaps the long term.

Danny Yatom, a former director of Israel’s Mossad intelligence service, said the US handling of the Syrian crisis and its decision not to attack after declaring red lines on chemical weapons has hurt Washington’s credibility.

“I think in the eyes of the Syrians and the Iranians, and the rivals of the United States, it was a signal of weakness, and credibility was deteriorated,” he said.

The Syrian rebels, who were promised US arms, say they feel deserted by the Americans, adding that they have lost faith and respect for Obama.

The White House contends that its threat of a military strike against Assad was what caused the regime to change course and agree to plan reached by Moscow and Washington to hand its chemical weapons over to international inspectors for destruction. That’s a far better outcome than resorting to military action, Obama administration officials insist.

Gulf rulers also have grown suddenly uneasy over the US outreach to their regional rival Iran.

Bahrain Foreign Minister Sheik Khalid bin Ahmed Al Khalifa said Gulf states “must be in the picture” on any attempts by the US and Iran to open sustained dialogue or reach settlement over Tehran’s nuclear program. He was quoted Tuesday by the London-based Al Hayat newspaper as saying Secretary of State John Kerry has promised to consult with his Gulf “friends” on any significant policy shifts over Iran — a message that suggested Gulf states are worried about being left on the sidelines in potentially history-shaping developments in their region.

In response to the new US opening to Iran to deal with its suspected nuclear weapons program, Israeli Prime Minister Benjamin Netanyahu told the UN General Assembly that his country remained ready to act alone to prevent Tehran from building a bomb. He indicated a willingness to allow some time for further diplomacy but not much. And he excoriated new Iranian President Hassan Rouhani as a “wolf in sheep’s clothing.”

Kerry defended the engagement effort, saying the US would not be played for “suckers” by Iran. Tehran insists its nuclear program is for peaceful energy production, while the US and other countries suspect it is aimed at achieving atomic weapons capability.

McKinley, the Australian expert, said Syria and the US budget crisis have shaken Australians’ faith in their alliance with Washington.

“It means that those who rely on the alliance as the cornerstone of all Australian foreign policy and particularly security policy are less certain — it’s created an element of uncertainty in their calculations,” he said.

Running against the tide of concern, leaders in the Philippines are banking on its most important ally to protect it from China’s assertive claims in the South China Sea. Defense Secretary Voltaire Gazmin said Manila still views the US as a dependable ally despite the many challenges it is facing.

“We should understand that all nations face some kind of problems, but in terms of our relationship with the United States, she continues to be there when we need her,” Gazmin said.

“There’s no change in our feelings,” he said. “Our strategic relationship with the US continues to be healthy. They remain a reliable ally.”

But as Cordesman said, “The rhetoric of diplomacy is just wonderful but it almost never describes the reality.”

That reality worldwide, he said, “is a real concern about where is the US going. There is a question of trust. And I think there is an increasing feeling that the United States is pulling back, and its internal politics are more isolationist so that they can’t necessarily trust what US officials say, even if the officials mean it.”