Obama’s no-show in Asia a boost for China 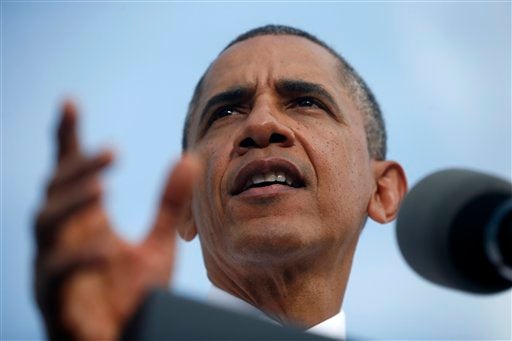 WASHINGTON—President Barack Obama’s decision to scrap his Asia trip is a setback for his much-advertised pledge to shift the focus of foreign policy to the Pacific and a boost for China’s attempt to gain influence in the region.

By staying home because of the partial government shutdown, Obama hands new Chinese leader Xi Jinping a chance to fill the void at two Asian summits Obama had planned to attend. It’s the third time since 2010 that Obama has cancelled an Asia trip, all because of domestic political crises.

Washington’s budget crisis has reached the point where the White House felt compelled to skip Asia, giving Obama room to work with Congress on reopening the government. Had Obama left to attend the meetings, it would have given weight to critics who have said he’s more willing to negotiate with foreign leaders than the speaker of the House.

Secretary of State John Kerry will represent him at the summits in Indonesia and Brunei.

Budget strains had already put a damper on the Pentagon’s push to assert itself in the Pacific, and administration officials had begun casting the shift in policy more in terms of expanding diplomatic efforts, creating more trade and economic ties and just showing up in Asia more often.

Now the showing up part has taken a hit.

The Syria crisis is only the latest example of how Obama’s foreign policy is still drawn to the Middle East. Defense Secretary Chuck Hagel was in Asia last month when Washington was drawn to the brink of military intervention before Syria agreed to give up its chemical weapons arsenal, diverting Hagel’s attention.

The situation works for China, which is rapidly modernizing its armed forces and boosting its regional influence. Xi has been visiting Indonesia and Malaysia this week to improve Beijing’s reputation at a time when its aggressive stance on territorial issues has strained ties with some countries in southeast Asia. Washington’s acute political paralysis gives Xi a freer hand to become the big presence in the room.

“It shows that China has a functional government and America doesn’t at the moment,” said Kerry Brown, a China expert at the University of Sydney in Australia. “It’s just another sign that America is kind of losing its luster, losing its status.”

In announcing Obama’s decision Thursday, White House press secretary Jay Carney said the government shutdown is “setting back our ability to create jobs through promotion of U.S. exports and advance U.S. leadership and interests in the largest emerging region in the world.”

Even so, he said, Obama is committed “to the rebalancing of our policy” toward the Asia-Pacific and looks forward to going at another time. Obama has made five trips to Asia as president.

In Indonesia earlier this week, lawmakers applauded after Xi became the first foreign leader to address Parliament — this in a country where Obama lived as a child. Xi’s call for greater cooperation began with an informal greeting in the local Bahasa Indonesian language — a rare display of oratorical skill for a Chinese leader.

Then Xi went to Malaysia, where he and his wife met Prime Minister Najib Razak and received a ceremonial welcome at Parliament on Friday that included a military honor guard and 21-gun salute.

In Indonesia, Xi signed deals worth billions of dollars, while in Malaysia, he agreed to boost military cooperation and training to fight transnational crime and terrorism.

“If they can furlough jobs, cease government services and risk a downgrade in the country’s credit rating, American politicians may start finding it tough to be consistent in their political reassurances about U.S. commitment toward faraway Asia,” wrote Simon Tay, chairman of the Singapore Institute of International Affairs.

Retired U.S. Adm. Dennis Blair, a former head of US Pacific Command, played down the impact of Obama’s cancellation and said the visit could wait until Obama can give the region his full attention.

“The United States has been here in this region in a major economic, diplomatic, military and influential way ever since 1944 and that situation has not changed,” he said.

Still, the cancellation has been particularly disappointing to Southeast Asian nations that look to the U.S. as a counterweight in their disputes with China over the South China Sea. The Philippines, for example, has turned to the US to build up its ill-equipped defense forces during this time of acrimonious rifts with China in disputed waters.

Hagel and his predecessor, Leon Panetta, have made frequent visits to the Asia-Pacific region since 2011 in a signal of the importance of the military dimensions of the Obama administration’s Asia ambitions.

The most visible sign of Washington’s military shift toward Asia and the Pacific may be the rotational deployment of about 250 Marines to northern Australia. The Pentagon also is arranging more exercises with partners in the region and has deployed the USS Freedom, the first in a new class of smaller combat vessels, to Singapore.

It also is shoring up relations with long-time allies such as Thailand while exploring deeper ties to old enemies like Vietnam, and has opened negotiations with the Philippines to increase the US military presence there.

Still, the refocus to Asia seems more sluggish than was envisioned.

“The administration has found themselves in a rhetorical box; they have committed themselves to a rebalancing, or a pivot, without fully understanding what they would have to do to make a material difference in America’s position,” said Michael Auslin, director of Japan studies at the American Enterprise Institute in Washington.