Kerry to play lead US role at Asia summits 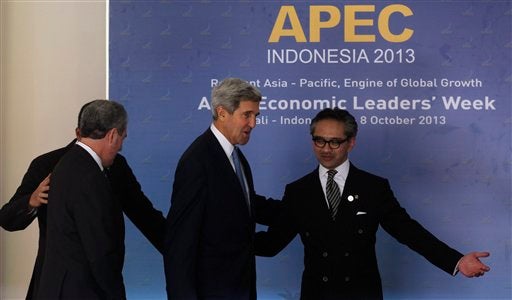 BALI, Indonesia—Nearly a decade after his unsuccessful 2004 bid for the White House, John Kerry is getting the chance to be presidential as he fills in for US President Barack Obama at heads of state summits in Asia.

The secretary of state learned Friday while flying from Japan to Indonesia that he would lead heavyweight US delegations to the Asia Pacific Economic Cooperation Forum in Bali and the East Asia Summit in Brunei that begin this weekend.

Kerry had been in Tokyo for security talks and was already planning to attend both meetings but only in a supporting role. He found out earlier in the week that he would be visiting Malaysia and the Philippines instead of Obama next week as the White House pared down and then ultimately cancelled the president’s planned four-nation Asian tour to deal with the government shutdown in Washington.

Obama’s absence has led speculation and concern that the United States is no longer fully committed to serving as a counterbalance to China’s growing assertiveness in the Asia-Pacific. As Obama’s Asia trip diminished and eventually disappeared, Chinese leader Xi Jinping was visiting Indonesia and Malaysia, where he was feted even as Beijing is being criticized by some in the region for its aggressive stance on territorial issues.

One of Kerry’s first meetings in Bali was with the Australian and Japanese foreign ministers, who all agreed that maritime disputes in the East and South China seas between China and its smaller neighbors must be settled peacefully without aggression.

The three “opposed any coercive or unilateral actions that could change the status quo in the East China Sea,” they said in a statement released after the meeting, referring to the dispute between China and Japan over an remote island group known in Japan as the Senkakus. They also underlined the importance of efforts to reduce tensions and to avoid miscalculations or accidents in the East China Sea, including by improving marine communications.

At the same time, they stressed the importance of respect for rule of law in the West Philippine Sea, where various members of the Association of South East Asian Nations have conflicting claims with China over islands.

The trio “affirmed the importance of peace and stability, respect for international law, unimpeded trade and freedom of navigation in the South China Sea,” the statement said.