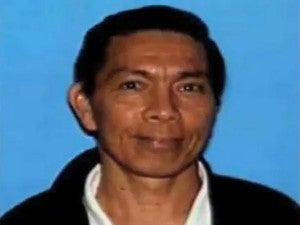 SAN FRANCISCO—Gene Penaflor, 72, has been missing since Tuesday, September 24, after he left Monday morning on a deer hunting trip with his hunting partner in the Mendocino National Forest.

They were supposed to meet at noon for lunch after their morning hunt, but he never showed up.

A missing persons report was filed after the mandatory 24-hour period, and the Lake County sheriffs department began a search for him Wednesday late afternoon until nightfall.

More than ten counties (including Lake, Monterey, Siskiyou, San Mateo counties) participated in the search operation, using helicopters and four canine units. The Bay Area Mountain Rescue, reputedly one of the best, also was included in the search.

The search continued through 5 p.m. Saturday and was suspended because of anticipated rain.  After three and a half days of searching and combing the areas, there were no clues to be found.

At the end of the search, Penaflor’s family was informed that, unfortunately, there were no leads. The case is not closed; the search would continue after the rains stop, but the resources would not be as much as in the past four days.

Penaflor is an avid hunter and has been hunting for 30 years. He is capable of survival skills and extremely knowledgeable about the wilderness, his family said.

He had a rifle with him when he went hunting, according to his hunting partner of ten years. The signal for help was three quick successive shots, but the partner never heard those shots. He said it was unlikely and out of character for Penaflor to be late for lunch, since they have been hunting in this particular area for at least seven years.

Penaflor has lived in San Francisco, specifically the Bernal Heights neighborhood, for 30 years. He has two sons, Gale (lives in Emeryville, CA) and Jeremy (lives in Daly City). He is in good health and has no medical conditions.