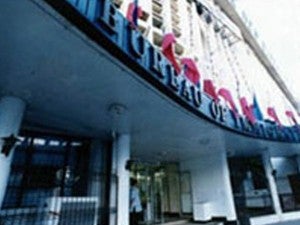 MANILA, Philippines—The Bureau of Immigration has arrested one of China’s most wanted fugitives, a businessman accused of operating a multimillion-dollar pyramid investment scam and illegal gambling racket that duped more than 40,000 people in his country.

Zhang Fuhui, 26, was captured on Sunday by immigration authorities in one of the units of Solex II, a commercial building along Soler Street in Manila following a request from the Chinese Embassy that he be arrested and deported, according to BI chief Siegfred Mison on Wednesday.

Along with Zhang, two other Chinese nationals-Huang Zhen Xue and Liu Yung were also arrested for failure to present to authorities their travel documents.

Mison said Zhang’s arrest was pursuant to a summary deportation order issued by the bureau’s board of commissioners last Jan. 21 for being an undesirable alien.

According to the Chinese Embassy, Zhang has a pending arrest warrant in Huai An City in the province of Jiangsu, where he and his accomplices were charged with “economic crimes.”

Chinese authorities have alleged that Zhang had conspired with other suspects to organize a pyramiding company called Bao Ma that promoted its business and amassed huge profits through its website sometime in April 2012.

The scheme allegedly duped roughly 40,000 Chinese victims, whose combined losses amounted to at least 1.482 billion yuan ($242 million). A few months later, the suspects reportedly launched another website that invited gamblers to bet on its online games.

The new racket was said to have lured more than 4,000 online gamblers, whose total bets reached more than 61 million yuan. The suspects allegedly profited RMB 6.3 million from the total amount of bets.

Zhang will be sent back to China to face the charges filed against him as soon as the bureau secured the required clearances for his deportation, said BI acting intelligence chief Jose Carlitos Licas yesterday.

The Chinese national has also been placed in the immigration blacklist, which will prevent him from returning to the Philippines, added Licas.