Obama cancels trip to Malaysia after US shutdown 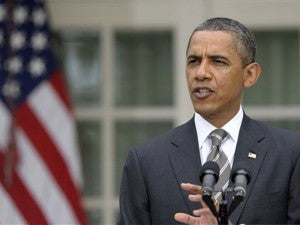 MANILA, Philippines – United States (US) president Barack Obama has cancelled his visit to Malaysia after his government shut down due to a deadlock at the US Congress over federal budget, Malaysian media reported.

“President Obama said he is not able to visit Malaysia and will be sending state secretary John Kerry,” Malaysian Prime Minister Najib Razak was quoted as saying by The Star Online website.

Obama personally called the prime minister by phone Wednesday to inform him of the cancellation, the report said.

The US government was partially shut down October 1, the first time in 17 years, after a deadlock between Republicans and Democrats in passing the budget in Congress.

Aside from Malaysia, Obama is also scheduled to visit Brunei, Indonesia and the Philippines.

The Department of Foreign Affairs (DFA) however said that there was still no advice from the State Department regarding Obama’s trip to the Philippines this coming October 11 and 12.

“We have not received any advice from the US State Department on any change in President Obama’s planned visit to the Philippines,”  DFA spokesman Raul Hernandez said Tuesday.