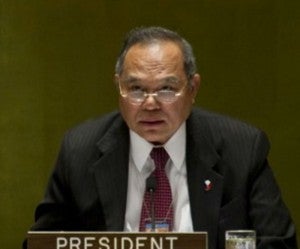 MANILA, Philippines – The Philippines has signed a treaty at the United Nations (UN) Headquarters that aims to regulate the international trade in conventional arms.

“The Philippines signed the [arms trade treaty] ATT to fulfill our country’s commitment to promoting international peace and security. The proliferation of conventional arms has contributed to violence and instability in many parts of the world including the Philippines and there is a need to address this serious concern,” Ambassador Libran Cabactulan said.

In a statement, the Department of Foreign Affairs said that the ATT covers conventional weapons intended for military use and small arms, their ammunition, parts and components.  It contains strong regulations, based on human rights and international humanitarian law, and provides a set of criteria in the export of conventional arms.

The ATT was opened for signature on June 3, 2013, and will enter into force after 50 ratifications.  To date, the total number of signatures represents more than half of all Member States.

The Philippines actively participated in the negotiating process leading to the adoption of the ATT including the four Preparatory Meeting of the Arms Trade Treaty (2010-2012), the July 2012 Negotiating Conference and the Final Conference in March 2013, the DFA said.