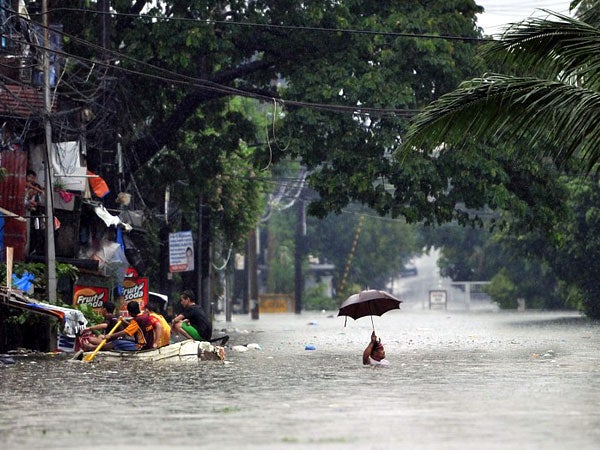 A resident (R) wades through chest-deep floodwaters along a street while his neighbors (L) paddle an improvised life raft in Manila on September 23, 2013, after torrential rains pounded Luzon island worsened by Typhoon Usagi. The world’s most powerful storm this year also pounded parts of Camboadia and Vietnam killing at least 36 people. AFP FILE PHOTO

HANOI — Heavy monsoon rains exacerbated by Typhoon Usagi have pounded parts of Vietnam and Cambodia killing at least 36 people, authorities said Tuesday, with many swept to their deaths in floods.

Despite not being directly hit by Usagi — the world’s most powerful storm this year — parts of Southeast Asia have seen a worsening of their annual rainy season as the typhoon barrelled through the Philippines and China in recent days.

Central and southern Vietnam have been hit by bad weather since early last week, inundating fields and villages, with 24 dead and six missing, according to a 10-day update from the country’s flood and storm control department.

At least 12 people, including six children under six years old, have died in the deluge, said Keo Vy of the National Disaster Management Committee.

Typhoon Usagi killed at least two people in the Philippines and some 25 people in southern China as it swept across the region over the weekend.

As the typhoon bore down on Hong Kong, operators shut down one of the world’s busiest sea ports and nearly 450 flights were either cancelled or delayed on Sunday.

At least 18 further deaths have been reported in the Philippines in monsoon rains worsened by the typhoon, which also unleashed landslides and power outages across southern Taiwan at the weekend as it ploughed through the Luzon Strait with ferocious winds and heavy downpours.

Some 7,000 houses were inundated and more than 5,000 hectares of crops have been damaged in Vietnam, officials said, although much of the water has since receded.

Last year, more than 260 people were killed in floods in Vietnam.